The Next Actions tab in the Interaction Details widget is where you configure most of the dialog and interaction logic.

A Response Match & Action set contains the instructions for how to respond to the user input. You can create one or many sets depending on how many responses you need to support. The following image illustrates two sets, where the first is displayed. 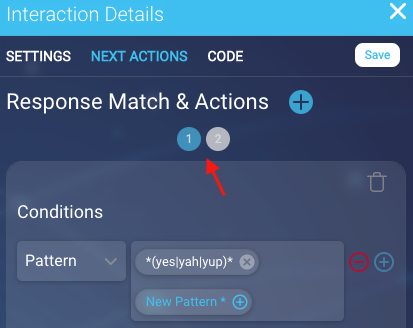 When adding a question or integration interaction to the dialog, you can configure conditional logic based on the user's response in order to take the user through the desired next steps. These are essentially "if…, then…" conditional statements, but when combined with pattern matching, intents and entities, they can deliver a powerful flow control engine for the bot.

In the first drop-down in the Conditions section, you specify how you want to match the user input. Methods include:

You can add more than one condition to an interaction for more complex flow control. To do so, click the

icon in the Conditions section.

A slot is a special type of variable that is automatically assigned an entity value when mapped to a specific entity. You can fetch the value of a slot variable in interactions or API integrations using{$botContext.slot.SLOT_VARIABLE_NAME}. For more on using slots, see Variables & Slots.

Variables are the default way to store and access important data points through the flow of the bot. You can fetch the value of a variable in interactions or API integrations inline using {$botContext.VARIABLE_NAME}. For more on using variables, see Variables & Slots.

Select the next step if the displayed condition is satisfied. You have three types of choices:

In the Fallback Response field, enter the text to be sent to the user if none of the defined conditions are met.

Use the Process User Response section to add code that runs after the user has responded to this interaction. This code can be used in place of the response conditions, or in conjunction with them after a successful match.

You can use the built-in scripting functions to access variables and manipulate data.