As a bot developer, you can use Conversation Builder to quickly deploy bots to a Conversational Cloud environment.

If you have IP restrictions in place, you'll need to do some whitelisting before adding agent connectors.

Before you can deploy a bot, you must complete the following, pre-requisite steps in Conversational Cloud:

For help with these steps, see the LivePerson Knowledge Center.

After the pre-requisite steps are performed, at a high level, deployment is a two-step process:

LivePerson recommends that, when you connect your bot to Conversational Cloud in a production environment, you deploy at least two Conversational Cloud agent connectors for a single bot. This is so the second can serve to support failover if the first goes down. Additionally, if you have traffic considerations, you might want to deploy three or more. A good baseline is no more than 50 concurrent conversations per agent connector (e.g., deploy 4 connectors to support 200 concurrent conversations).

There is no limit to the number of agent connectors that a bot can have.

For some practice at deployment, complete the Deploy the Bot tutorial.

The Agent Connectors page makes it fast and easy to understand the status of the agent connectors for a single bot. Unless you're troubleshooting a connector, typically you won't need to dive into the details on the individual components that support the end-to-end connection. Use the Start/Stop toggle button to start and stop an agent connector.

Adding an agent connector creates a connection between the bot and a bot agent in the target Conversational Cloud environment.

An agent can belong to only one bot.

To add an agent connector

To edit an agent connector

You can delete an agent connector as long as it isn't running.

To delete an agent connector

Establishing the connection can take a few minutes.

If a connector enters an Offline status, which is an error status, click Details to view the statuses of the individual, underlying components that support the end-to-end connection. 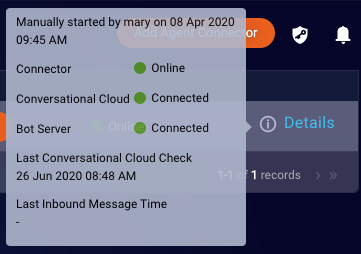 For status descriptions, see this section.

Custom configuration fields are optional key/value pairs that you can add to alter the behavior of the bot. They allow for fundamental changes in the bot's behavior outside of the design of the bot and are injected at the point of connecting the bot to an agent on a 1:1 basis.

You add these fields in the Advanced Options of the agent connector.

If you have multiple agent connectors deployed for the same bot, remember to add identical custom configuration settings to each of them. Otherwise, you'll get different behavior between the bots within an account.

To make a change to a custom configuration field for a deployed agent connector, stop the connector first.

By default, a message from the consumer is shown to the consumer as "Read' once it is sent. Set this field to "SENT" if you want the message to be shown as "Sent" instead. Once the agent logs into Conversational Cloud and views the message, this status will change to "Read."

Typically, the bot agent receives a consumer message after joining the conversation, but this isn’t always the case. For example, the consumer might delay in responding. Or, the conversation might have been one that was transferred from another bot agent. In cases like these, the defaultGreetingMessage is designed to wake up the bot and trigger the proper dialog flow. Ensure that the bot supports Small Talk or includes a dialog flow that supports receipt of whatever message you use here.

See also disableGreetings, which is farther below.

The Step Up message sent to the bot when Step Up authentication happens.

See also defaultGreetingMessage, which is farther above.

This custom configuration field controls the behavior of Structured and Button questions, not Quick Reply questions.

By default, when you specify a callback value for a button in a Structured or Button question, that value is sent to the bot when the consumer selects the button. What’s more, that value, not the button’s label, is displayed to the consumer as their selected choice.

In many cases though, you want to send the callback value to the bot, but you want to hide this from the consumer, displaying instead the button’s label to the consumer as their choice. You can accomplish this with the enableButtonTextOnPostback custom configuration field.

If you set this field to true, the selected button’s label is displayed to the consumer as their choice. You can still retrieve the callback value that is sent to the bot; to do this, use the getButtonPayload scripting function in the Process User Response code for the question interaction.

If this field is unset or you set this field to false, the selected button’s callback value is displayed to the consumer as their choice.

If this is true, and if the bot is stuck, the conversation is transferred to a specific skill. This transfer is only done as a final measure after other strategies, if enabled, are tried and found to be unsuccessful. See the best practice discussion in this topic.

If the conversation is transferred to a skill because the bot is stuck, this is the message to send to the consumer before the transfer is performed. Used in conjunction with escalateOnStuckConversation. See the best practice discussion in this topic.

Default value: I’m having some trouble. Let me connect you with an agent.
Messaging: Yes
Chat: No

If the conversation is transferred to a skill because the bot is stuck, this is the ID of the appropriate skill to which to transfer the conversation. Used in conjunction with escalateOnStuckConversation. See the best practice discussion in this topic.

If you don’t set this field, the transfer will not occur.

The value in milliseconds for the period of time to pass before invoking fallback escalation.

For example, assume the bot agent receives a message from the consumer at 1:00 p.m., and it then receives the consumer's next message at 1:20 p.m. The delay between consumer messages is 20 minutes. If the maxConsumerMessageDelay is set to 30 minutes, the bot will respond to the message received at 1:20 p.m.

Conversely, assume the bot agent receives a message from the consumer at 1:00 p.m., and it then receives the consumer's next message at 2:00 p.m. The delay between consumer messages is 60 minutes. If the maxConsumerMessageDelay is set to 30 minutes, the bot will not respond to the message received at 2:00 p.m.

The default value of 30 minutes should suit most use cases due to the sequential nature of bot conversations, where the conversation either ends in resolution or escalation. However, messaging is asynchronous, so a consumer might reply in intervals that are longer than 30 minutes. As a result, you can increase this value if needed based on your use cases. As a best practice, LivePerson recommends a maximum value of 7 days.

When the agent escalation fails, we send an _agent_escalation_failed_ message. However, this can end in infinitely loop if the escalation keeps failing. This will set the max number of failure messages sent.

The bot collects and aggregates consumer messages before processing them. By default, anything sent to the bot within a 300-millisecond window is concatenated into a single message for processing. For example, if the consumer sends “hi,” pauses briefly, then sends “how are you,” and both messages are sent within the 300-millisecond window, the bot receives “hi how are you” for processing.

You can customize this per your requirements; for example, to use a 3-second window, specify 3000 milliseconds.

This is the maximum number of times to send the consumer's message to the bot. You can use this field to retry the consumer's last message when the bot fails to respond the first time. See the best practice discussion in this topic.

Note that this number represents the total tries, not the retries alone. Examples:

Do not set this value to zero. The default value of this field is 1, which means the consumer's message will be sent only once. This means if you don't want to add a retry flow, there's no need to add this field.

If the bot fails to respond to the consumer’s message, wait this amount of time (in milliseconds) before resending it based on the value of messageResendMaxRetries. Please see the best practice discussion here.

The amount of time in milliseconds to wait before the bot accepts the ring from UMS.

Vertical or horizontal display for rich structured content. Available for FB, Web, and GRBM. Setting tileDisplay to "horizontal" is useful for resolving formatting issues that might occur on specific channels.

If the bot’s context is reset (the conversation starts anew) because the bot is stuck, the consumer is asked to resend their original query. This is the message to send to the consumer in this case. Used in conjunction with userRetryOnStuckConversation. See the best practice discussion in this topic.

Default value: I’m sorry. Something went wrong, so let’s start fresh. Could you restate your question in a few words?
Messaging: Yes
Chat: No

If this is true, and if the bot is stuck, the bot’s context is reset (the conversation starts anew), and the consumer is asked to resend their original query. Used in conjunction with userNotificationMessageOnStuckConversation. See the best practice discussion in this topic.

This field is used to filter the messages processed by a Manager bot. Specify a comma-separated list of Regular Expressions, for example:

If you don’t set this field, the bot agent processes the message flow as usual.

When this field is “true,” the consumer doesn’t see “read” or “seen” in the messaging window after their message has been read. LivePerson recommends that you keep this set to "true." Manager bots don't need to send this kind of status update, and doing so can create unnecessary overhead in the bot response time.

If you set this true, the bot agent isn’t notified of activity within the conversation by any participant (typing, messages sent, when a message has been read). Doing this can eliminate unnecessary overhead and processing.

If you set this true, the bot agent is notified of conversation updates only in the primary/initial conversation, not the survey conversation. Doing this can eliminate unnecessary overhead and processing.

Once you’ve deployed your bot, you can use this page to test the experience in Web messaging at any time. You can also test using the Conversation Tester.

However, to test in any other messaging channel (Facebook, WhatsApp, etc.), you’ll need to set up that channel. For information on this, see the Messaging Channels section in the Knowledge Center.