All recommendations that are made based on consumer utterances are cached for 3 hours. Keep this in mind as you update your bots and knowledge bases. If things look stale during testing, try using a slightly different utterance.

Tip: To train your agents, you can start by enabling recommendations for a single skill.

Use a recommended bot or article

In Conversational Cloud, bot and article recommendations are displayed inline within the conversation. 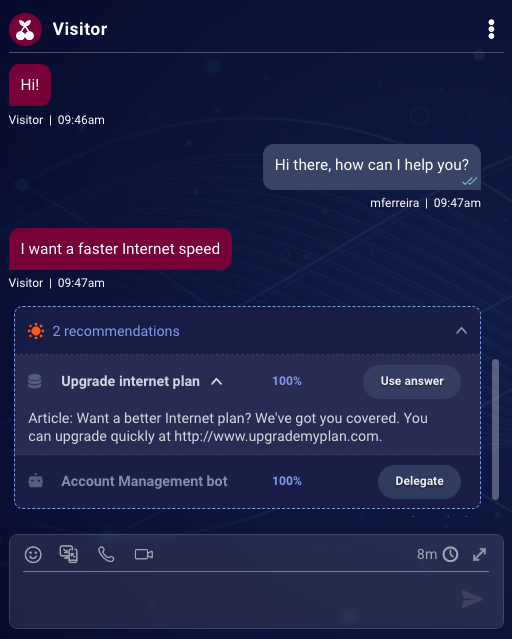 To use a recommended bot

To use a recommended article

Remove or replace the current bot

After you have joined a bot to a conversation, you can remove or replace it if desired:

Notify the agent when the bot has finished

If you’re recommending bots to your agents, it can be a challenge for the agent to know when the bot has finished its work. The agent must check back repeatedly on the bot’s progress. To solve this, the bot can send a private message when it’s finished handling the consumer’s request. The private message can tell the agent what action has been taken, and let them know that it’s time for them to rejoin the conservation to close things out with the consumer. More on private messages here.