A post-conversation survey bot lets you collect feedback from consumers at the end of a conversation with a custom bot or human agent. The survey bot can ask:

Use a post-conversation survey bot to measure bot/agent and skill performance and to identify opportunities to improve on your quality targets. 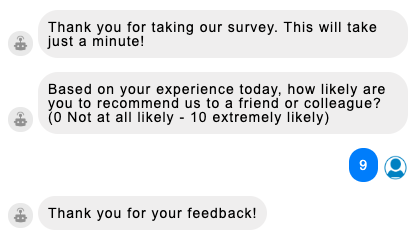 Survey bots are supported only in Messaging, not in Live Chat.

When creating a post-conversation survey bot, you work in Conversation Builder in the same, general way that you do with a custom bot. Create the bot and define its dialog flow, adding the interactions that meet your survey requirements.

The following are key similarities and differences between building survey bots and custom bots in Conversation Builder.

There isn't a one-to-one correspondence between survey bots and custom bots. Survey bots are more like "manager" bots. You assign a skill or set of skills to a survey bot. When a conversation ends, if the conversation's last skill matches one assigned to the survey bot, the survey bot automatically begins the survey. In this way, a single survey bot can be responsible for triggering surveys for multiple custom bots, all based on skill.

The above also means that:

If a conversation is closed automatically because it's been idle for a time, a survey isn't triggered.

By default, a survey times out (expires) after one hour, but you can change this time period if desired. You can also configure a "Session Expired" message to send to the consumer if they try to enter text after the session has expired. Both of these settings are found in Bot Settings, discussed farther below.

A survey can be closed in the following ways:

Both outcomes are tracked and reported on as part of the Analytics Builder, so you can fully analyze the results.

If you're new to working with survey bots, before you can begin building them, the feature must be enabled in Conversation Builder by LivePerson. Please contact your LivePerson account representative to enable this feature.

Step 2 - Build out the survey bot

In the dialog that's of type "Survey," define the survey. There are three types of survey interactions:

The survey interactions are predefined in the sense that you can't edit their structure, i.e., add or remove answer choices. However, you can change the question and answer text.

In a single survey bot, you can include only one of each survey interaction type. 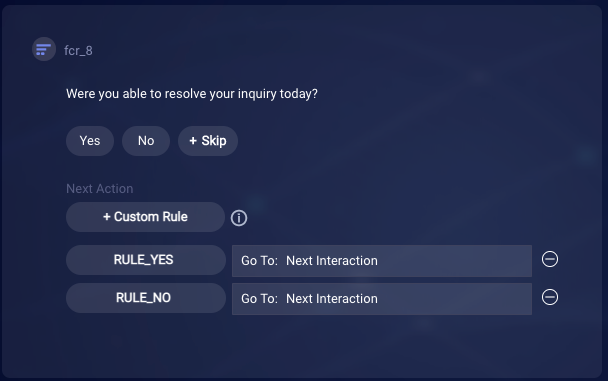 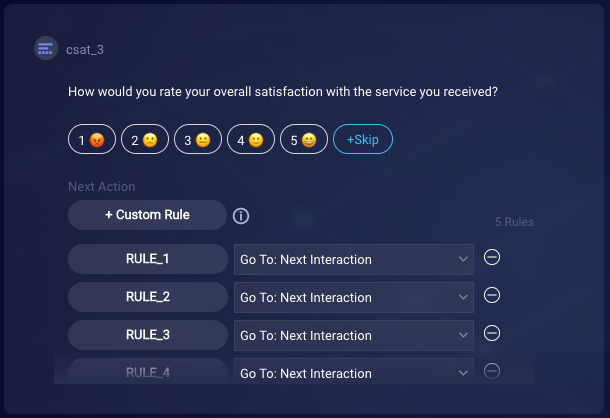 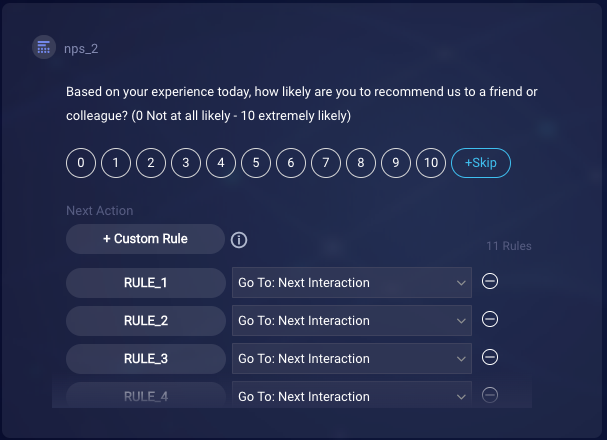 If you change the answer choices for a survey question, remember to update the defined conditions accordingly in the interaction's details.

To add a Skip option and thereby make a survey question optional, click the +Skip response and turn it from Off (blue) to On (white).

Clicking Skip automatically adds a custom rule for the "skip" response, so you can build out the survey logic as you require.

In an NPS interaction, don't enable Skip if your targeted channel is Facebook. Facebook doesn't support structured content that has more than 11 quick replies. The NPS question plus the Skip option is 12 quick replies. Using Skip will cause the conversation to end abruptly.

You can use only a subset of the standard interaction types in the Survey dialog; unavailable interactions are hidden from view on the toolbar.

Use the standard interactions to ask questions that reflect your brand's custom key performance indicators (KPIs) and/or other free-text questions. For example, you might want to obtain the consumer's age.

The handling of free text answers works in a survey bot just like it does in a custom bot. For example, when presented with the the CSAT yes/no question, if the consumer types "yes" or "Yes" instead of selecting "Yes," the response is understood. If the consumer enters anything else, the fallback response is sent. You can use conditions to catch other patterns if desired.

In the survey interactions in a survey bot, the fallback response is required, and there's a default value provided. 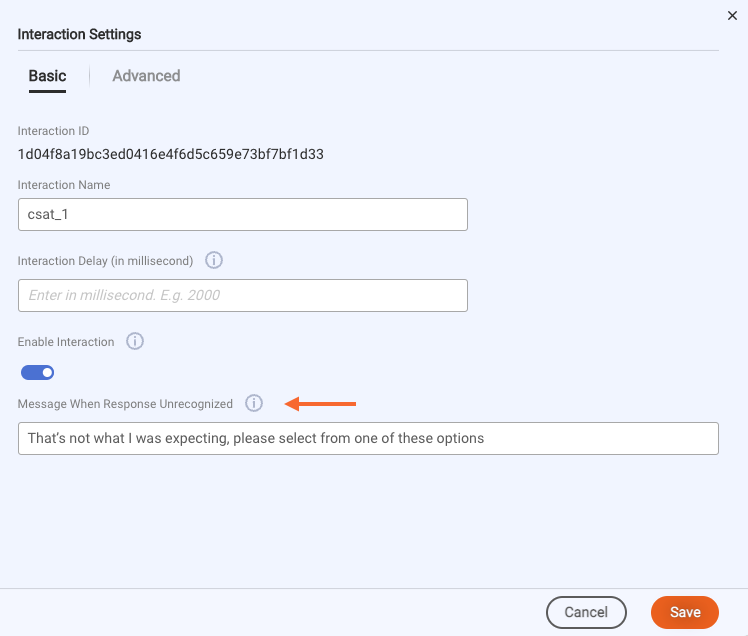 You can customize the default fallback responses in the survey interactions.

You cannot create a Fallback dialog.

As a best practice, end the dialog flow with an interaction whose next action is "Close conversation." This closes the conversation promptly. 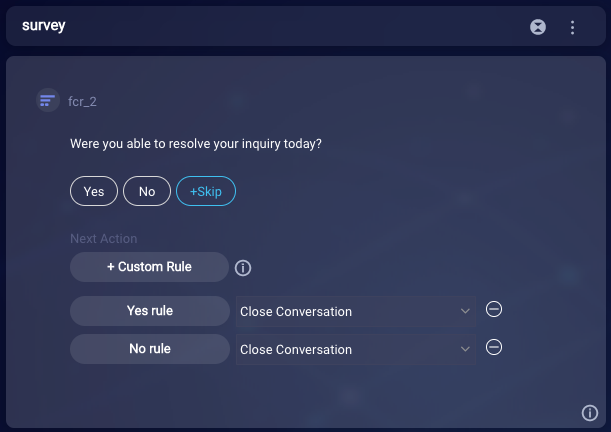 You don't need to include a Text interaction that thanks the consumer for their participation; you can define the Thank You message in the survey bot's settings (discussed below). 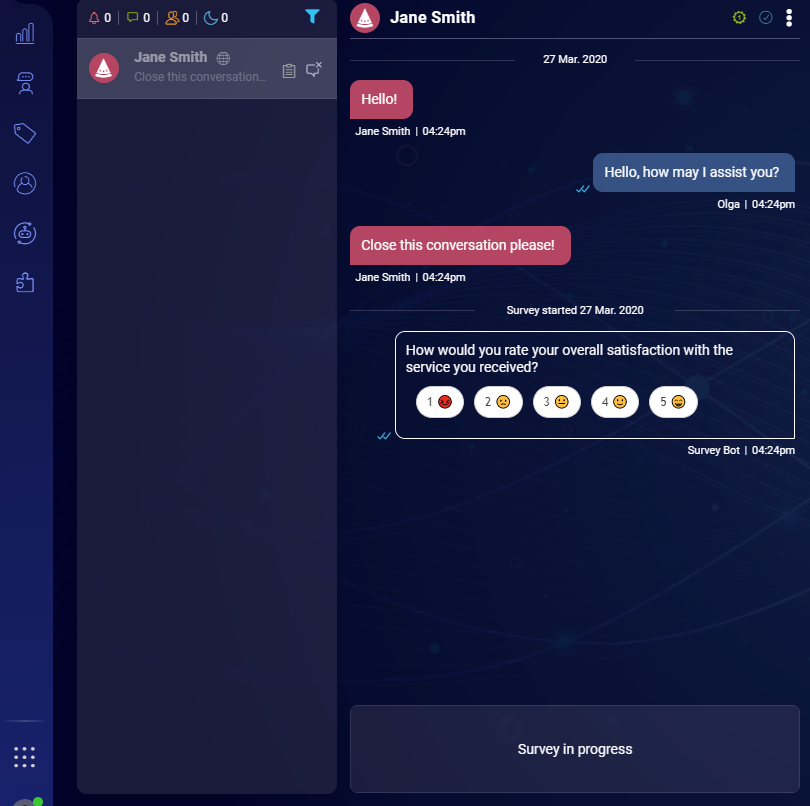 While the survey is active the agent won’t be able to write in the conversation. The survey will end when the consumer finishes entering the survey (if you've specified "Close Conversation" as the next action) or when the survey times out. In cases of an error with the survey flow or the survey bot, Conversational Cloud will close the survey after 48 hours as part of a conversation cleanup process.

If an agent has permissions to view survey results, the agent can see the survey transcript. 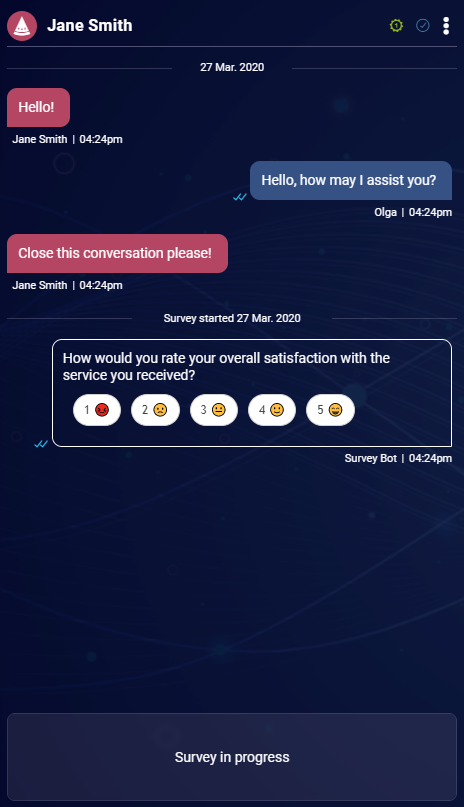 In the Conversations panel of the Manager Workspace, managers can view the survey scores (CSAT and NPS only) for all conversations shown.

Metrics from the FCR, CSAT, and NPS questions in surveys are captured in Conversational Cloud and exposed via the Analytics Builder application. You'll find this information in the predefined Survey Dashboard for Messaging, which you can use out-of-the-box or manipulate to create customized reports.

In the Bot Analytics application, you'll see survey bots reported in the same way as custom bots. There is no difference between the two.

Some brands are existing Bot Studio users who manage surveys in Bot Studio. Others are just getting started with surveys and starting out in Conversation Builder. Deployment works differently depending on which group you fall into:

If you have Bot Status Access permissions, you can use the Bots Status application that's intended for monitoring agent connectors to monitor your survey bots.

In Bots Status, you can redeploy the connector as a troubleshooting technique.

Additionally, there are a few operations available that are specifically for brands migrating from Bot Studio to Conversation Builder for survey bot management, namely:

For details on all these operations, see here. Keep in mind that all survey bots share a single agent connector, so performing any operation on one survey bot affects all the survey bots.

If you're an existing Bot Studio user with survey bots built in Bot Studio, the Post-Conversation Survey Bots feature in Conversation Builder is enabled by default.

How do I disable a survey bot?

If you need to temporarily remove a survey bot from your customer traffic flow (i.e., prevent it from triggering), access the bot's Skill setting in Bot Settings, and remove the assigned skill(s).

Yes, this works just like for a custom bot. The survey questions are displayed as plain text.

Can a consumer skip a survey entirely?

There's no way for the consumer to indicate they want to skip the survey entirely (e.g., no Skip button). However, the consumer can close the window to leave the survey.

The dialogs in my custom bots end with Close Conversation (LP_CLOSECONVERSATION). Do I need to change this?

Yes, you'll need to update the custom bots to use Close Dialog (LP_CLOSEDIALOG) instead. Close Dialog allows a post-conversation survey to be triggered, but Close Conversation does not.