A dialog is a group or flow of interactions that are triggered based upon consumer intent.

There are several types of dialogs:

You can make a dialog available to other bot developers as a dialog template.

“Context switching” is the term used to describe how Conversation Builder navigates the consumer back and forth between dialogs as it matches consumer utterances to intents, in effect, switching the context of the conversation.

Every time a consumer enters a new utterance in a conversation, there’s a chance that the utterance will match a new intent and “jump” the consumer out of one dialog and into another tied to the newly matched intent. When this happens, the new dialog is "pushed" to the top of a virtual, running "stack" of dialogs, and its dialog flow immediately begins. Once the dialog is completed, it is removed from the stack, and the consumer is returned to the dialog immediately underneath it in the stack. That dialog now tops the stack, and the last interaction that was sent by the bot before leaving the dialog is repeated.

You can see this context switching occurring in the following conversation: 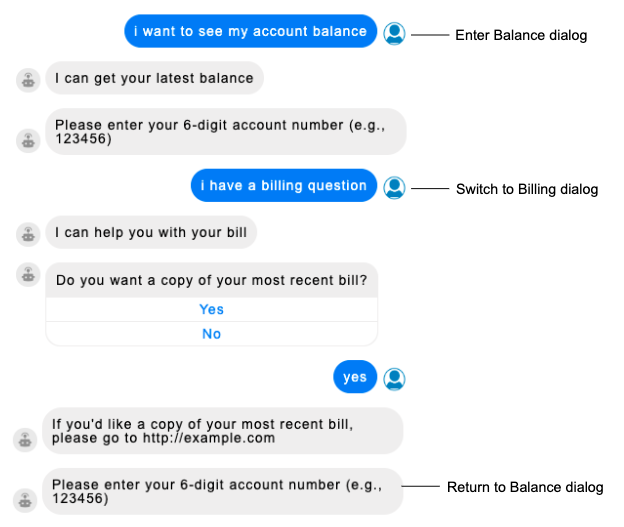 Your ability to redirect or restrict context switching depends on whether the consumer is responding to an open-ended statement or a question.

When a bot sends an open-ended statement, such as, "Please type your query below," it simply awaits the consumer's response. As a result, whatever the response is, it is processed by the NLU engine to try and find a matching intent and dialog. And if one is found, that dialog is "pushed" to the top of the dialog stack, and its flow immediately begins.

However, in contrast to open-ended statements, questions can have response conditions applied to the consumer's response, so they can be used to redirect the conversation flow (via the Next Action setting). Depending on the implementation, this can restrict context switching or prevent it from occurring. For example, if a dialog includes an interaction that specifies "end interaction" as its Next Action, this stops the flow within the dialog.

If the context switching behavior isn't desirable for your use case, you can disable it by setting the skipPreviousDialog bot variable to "true" with the following code:

This code disables the behavior until the variable is set to "false" once again.

To disable context switching at the conversation start, you can add this code to Global Functions. To disable it at the point of a specific situation, you can add the code to any interaction.

You can import dialogs from one bot to another within your organization. This can be useful when you have a well-defined dialog in one bot that you want to quickly and easily reuse in a different bot. Note the following:

When you import dialogs, consider and address any dependencies across the dialogs. You might or might not want to import all dependent dialogs.

To import one or more dialogs into a bot

You can duplicate a dialog that is of type Dialog (see Dialog types above). This can be useful when you have a well-defined dialog that you want to quickly and easily reuse in the same bot.

To duplicate a dialog

To create a dialog

To close the current dialog, set the interaction's Next Action to "Close Dialog."

Alternatively, add a Text statement that contains the special string "LP_CLOSEDIALOG." If the statement isn't the last interaction in the dialog, set its Next Action to "End Interaction" (not "Next Interaction").

LP_CLOSEDIALOG is a system message; even though it appears in the Preview window, it isn't shown to the consumer when deployed.

These methods for closing the dialog do trigger a post-conversation survey.

To close the current conversation, set the interaction's Next Action to "Close Conversation."

Alternatively, add a Text statement that contains the special string "LP_CLOSECONVERSATION." If the statement isn't the last interaction in the dialog, set its Next Action to "End Interaction" (not "Next Interaction").

LP_CLOSECONVERSATION is a system message; even though it appears in the Preview window, it isn't shown to the consumer when deployed.

Disable or enable a dialog

To disable or enable a dialog

Deleting a dialog is a non-recoverable action, so be certain about doing so before taking this action. For example, make sure the dialog isn't referenced by any others within the bot. As an alternative, consider disabling the dialog instead; you can do this in the dialog's settings.

To delete a dialog