Disambiguation is the process whereby the bot gets clarification from the consumer on what is meant by the consumer's message.

Sometimes two or more intents match closely to the message, so clarification is needed:

Other times, the consumer has expressed multiple intents in a single message, so, here again, clarification is needed:

When a disambiguation dialog is used, the bot presents the best matches to the consumer and lets the consumer choose which is correct. This is shown in the examples above. The result is a better, smoother conversation.

An example use case

As an example, suppose the consumer enters "I lost my" and presses enter by mistake. The intent in this case isn't clear and might yield multiple, close matches. For example, it might mean a lost card or even a bereavement situation. Using a disambiguation dialog to clarify the consumer's intent means you can quickly address the correct issue.

How a bot triggers a disambiguation dialog 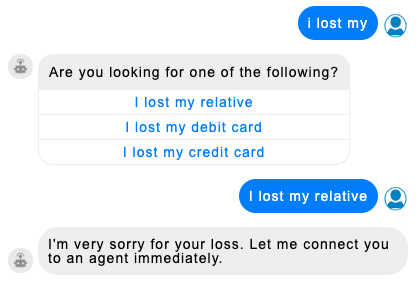 Once the consumer selects the correct intent, if that intent is associated with a Dialog Starter interaction in one of the bot's dialogs, that dialog's flow begins. Or, in the Disambiguation interaction, you can configure response match conditions to direct the flow as desired.

In contrast, when the bot matches the consumer's message to one or more intents with a high confidence level (Very Good or Good), then the dialog that's associated with the matched intent with the highest raw match score is triggered directly. The disambiguation dialog isn't triggered.

Also, the disambiguation dialog isn't triggered if the consumer's message matches a pattern. Only intents can be disambiguated.

In your bot, you might have some dialogs that start with dialog starters and others that don't. During disambiguation, when a consumer clarifies their intent and selects an intent that's used in a dialog starter, matching occurs, and the consumer is taken to the dialog. But when the consumer selects an intent that isn't used in a dialog starter, no matching occurs, so the fallback message is displayed. This is because there is no context switching during disambiguation. You can solve this and avoid the fallback message by adding a Response Match condition inside the disambiguation dialog — to handle the consumer's selection and direct the flow as you need. Or, you can configure things so that intents that aren't used in dialog starters aren't considered for disambiguation. Use the environment variable below to control this.

Note: This variable is set to false by default to provide you with a full view into all the intents that are being evaluated, matched, and shown to the user. Decide whether to keep or change the default value: If you keep this set to false, as mentioned earlier, you should handle an intent without a dialog starter by adding a Response Match condition inside the disambiguation dialog. Otherwise, set this variable to true to exclude intents without dialog starters.

What happens if I don't use a disambiguation dialog?

If you don't use a disambiguation dialog, here's how things work:

What happens if I use a disambiguation dialog, but no intents at or above the specified threshold are matched?

When this happens, the fallback dialog is triggered if one exists. Otherwise, the default fallback message is sent to the consumer.

How many disambiguation dialogs can I create?

There can be only one disambiguation dialog in a bot.

If I must set the dialog's Match Threshold to Fair Plus, what are the other options for?

The other options for the Match Threshold dialog setting are for users still using the legacy version of our LivePerson NLU engine. Still on LivePerson (Legacy)? There are many benefits of switching over to the LivePerson engine.