Failing to comply with the above validation points will cause the message to be dropped. This feature is only available for the messaging conversations not for chat conversations

Encoded Metadata can be sent with simple Text, Rich Content (structured content) and Multiple responses. For sending encoded metadata as a Text or Rich Content message you must use Custom Response type for your relevant intent as shown in Figure 3.1 below: 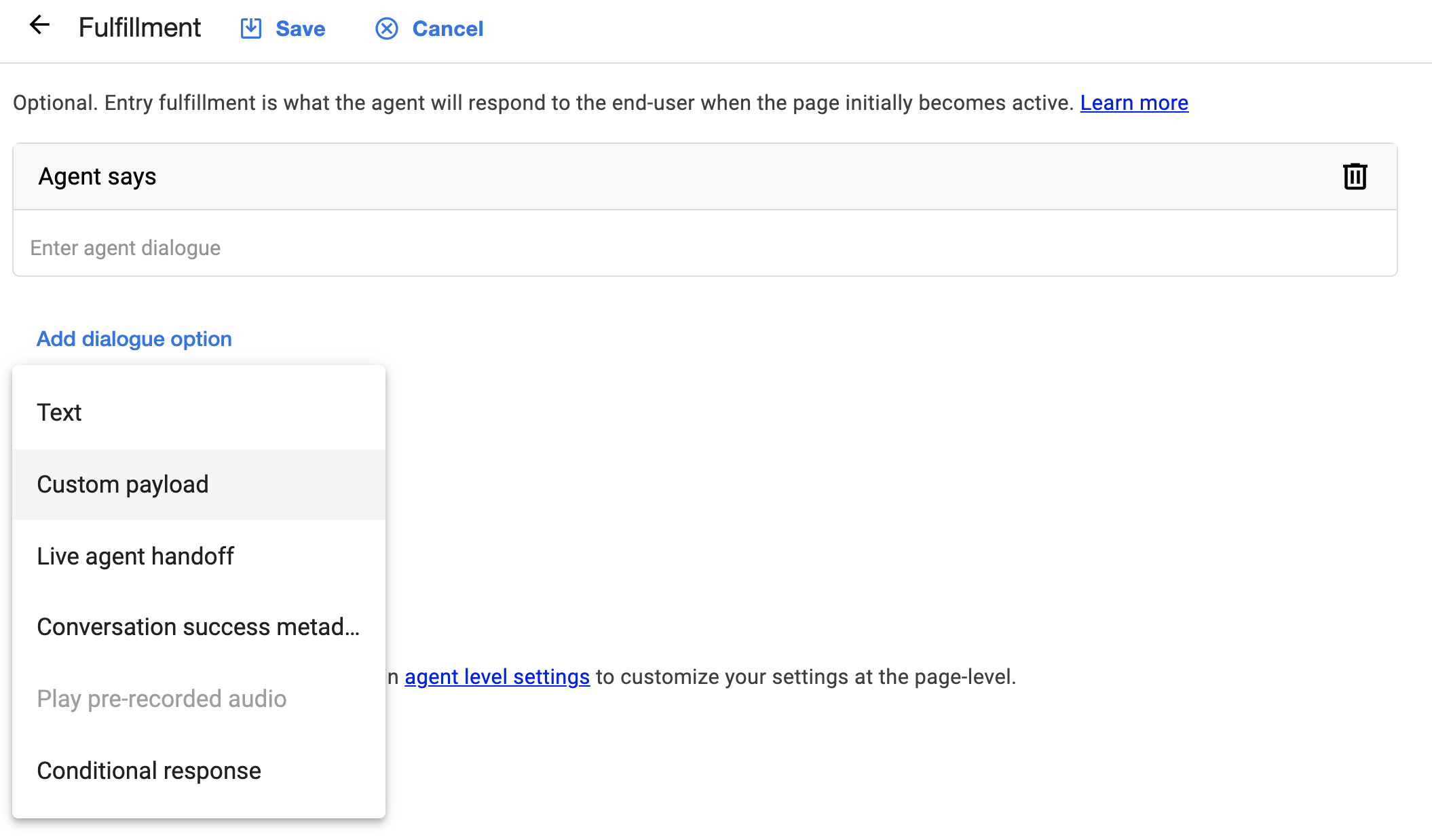 Please note that the default Text Response option in Dialogflow will not work with encoded metadata feature. You have to use Custom Response with the properties textResponse and encodedMetadata. Be careful with the camel-case characters you must provide it exactly the same.

An example of the custom payload text message response is below:

You need to add another property of encodedMetadata with your rich content object that you have created. An example of the simple Rich Content JSON can be seen below: 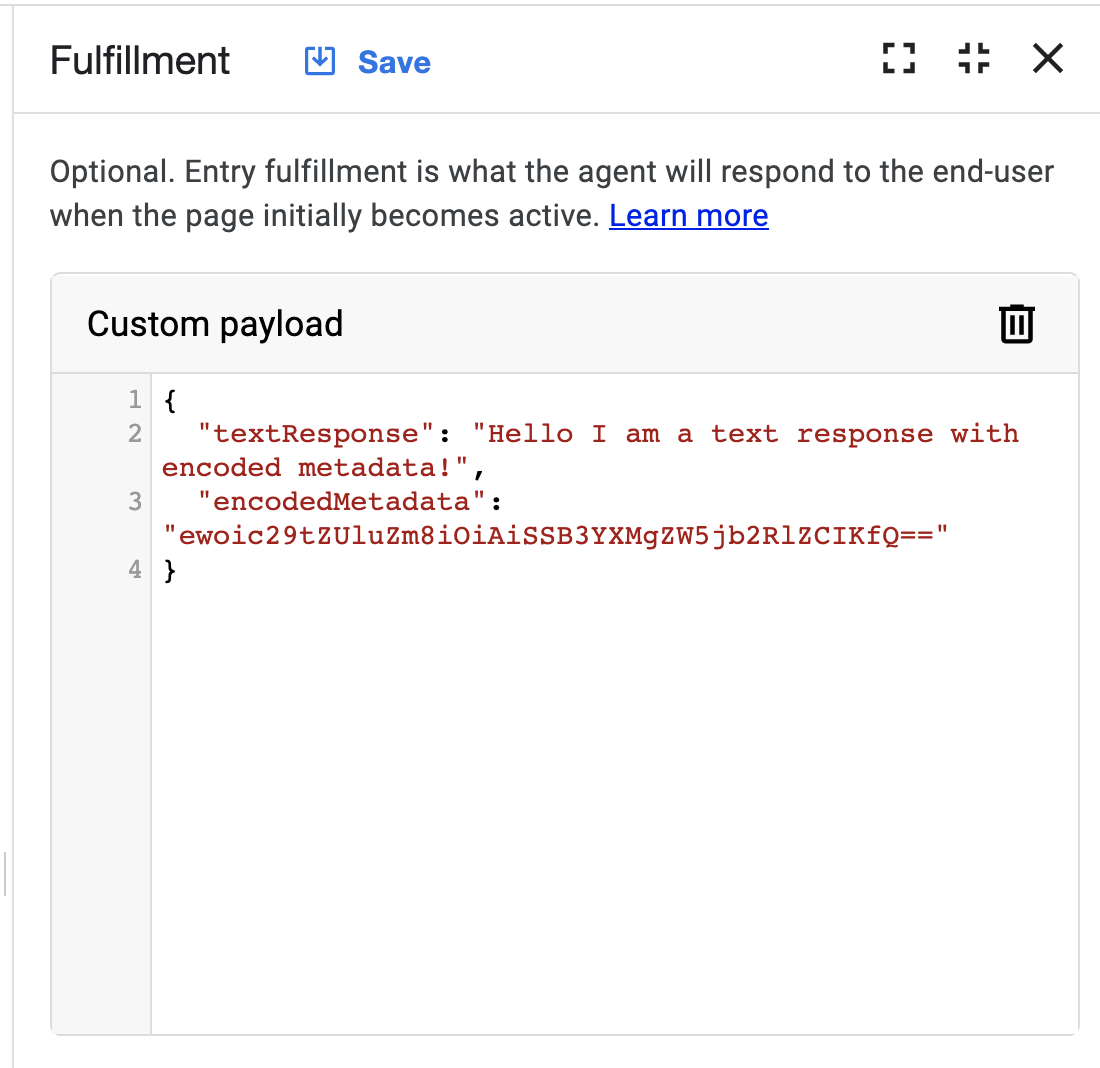 It is possible to send an event of type "delay" before regular content events and actions. This specifies the time the bot will wait before displaying the next message. The delay message can be added via the Custom Payload response in intent definition (as shown in Figure 3.4). There are two properties, delay and typing, which are a part of the Custom Payload response.

Setting a delay in between multiple messages is possible and an example of such a case (Message — Delay — Message) can be seen in Figure 3.4. 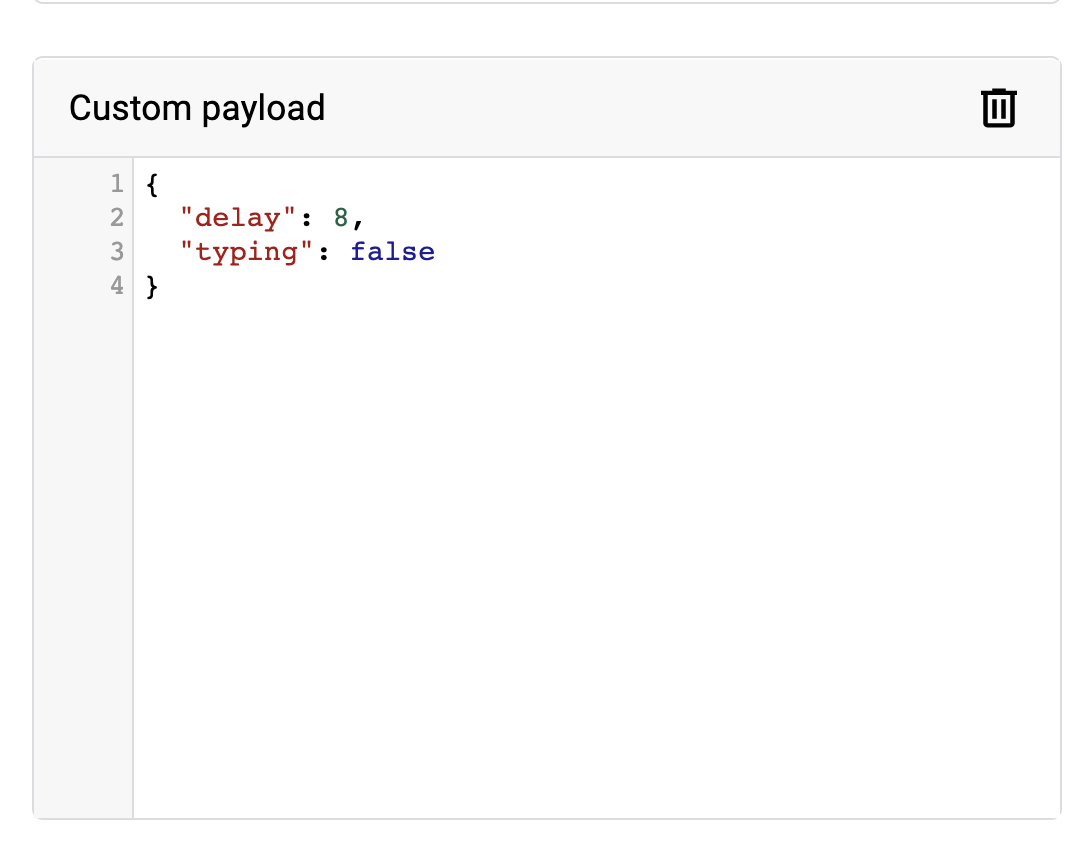 It is possible to send only a single delay response. The example payload of such response is below: 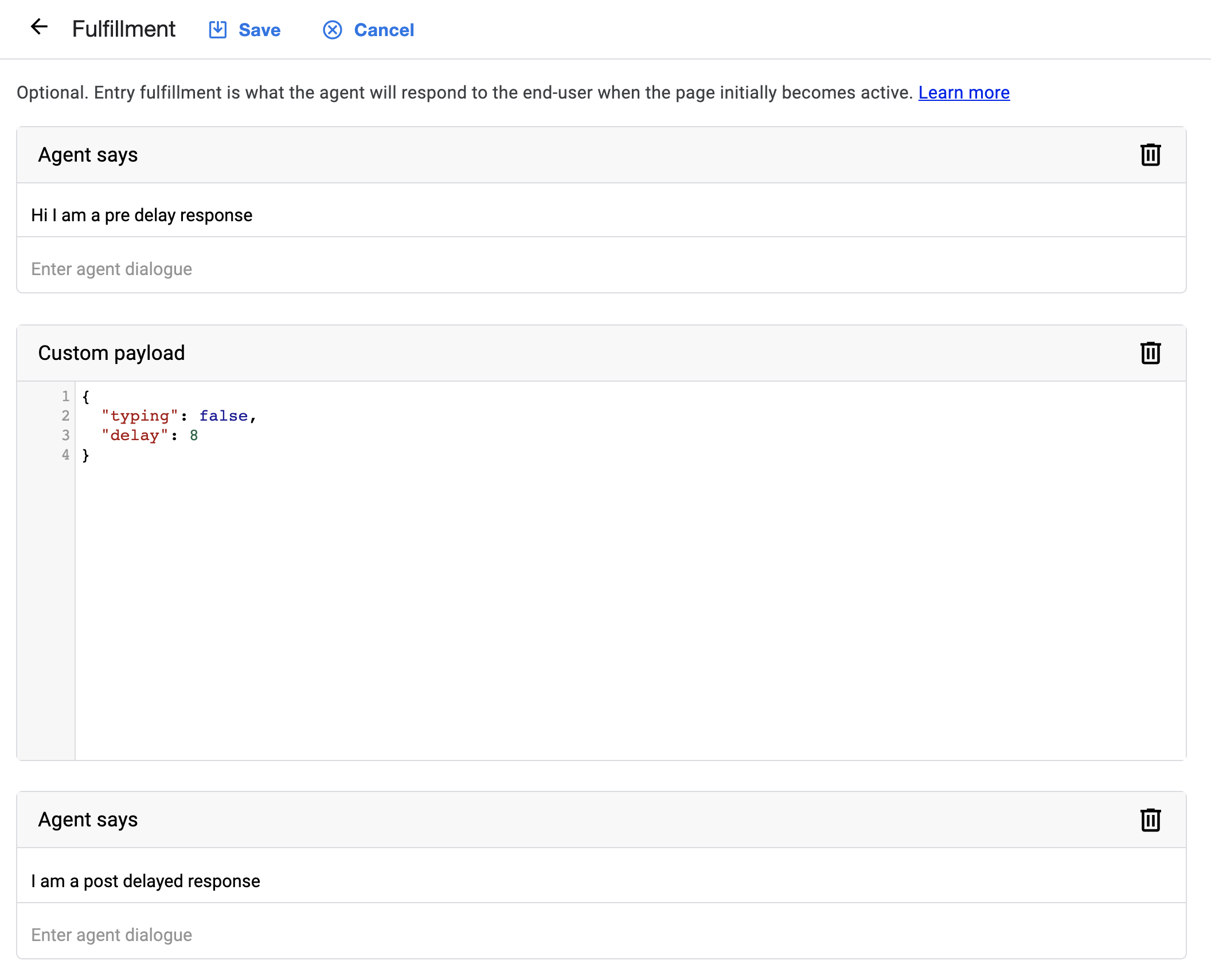 It is possible to send a private text message from the Conversational Cloud to other agents on the conversation. This feature can now be used via the Third-Party Bots as well. This will allow Brands to define private message text within the conversational flow of the bot. These messages are published into the conversation for other Agent/Manger participants. This enables Brands to customize messages giving more insight, summarizing actions taken by the bot, or also advising on next actions the handover agent should take.

Please note If you have not migrated to new Agent Workspace you will not be able to see the Private message indicator in the conversation window. Nevertheless, private text messages will not be shown to the consumer and only remain visible to Agents and Managers.

Please note private text message will never be shown to the consumer and will be visible only inside the conversation window of agent workspace. The private text message can be added via the Custom Payload response in intent definition (as shown in Figure 3.6). There are two properties, text and messageAudience, which are part of the Custom Payload response. 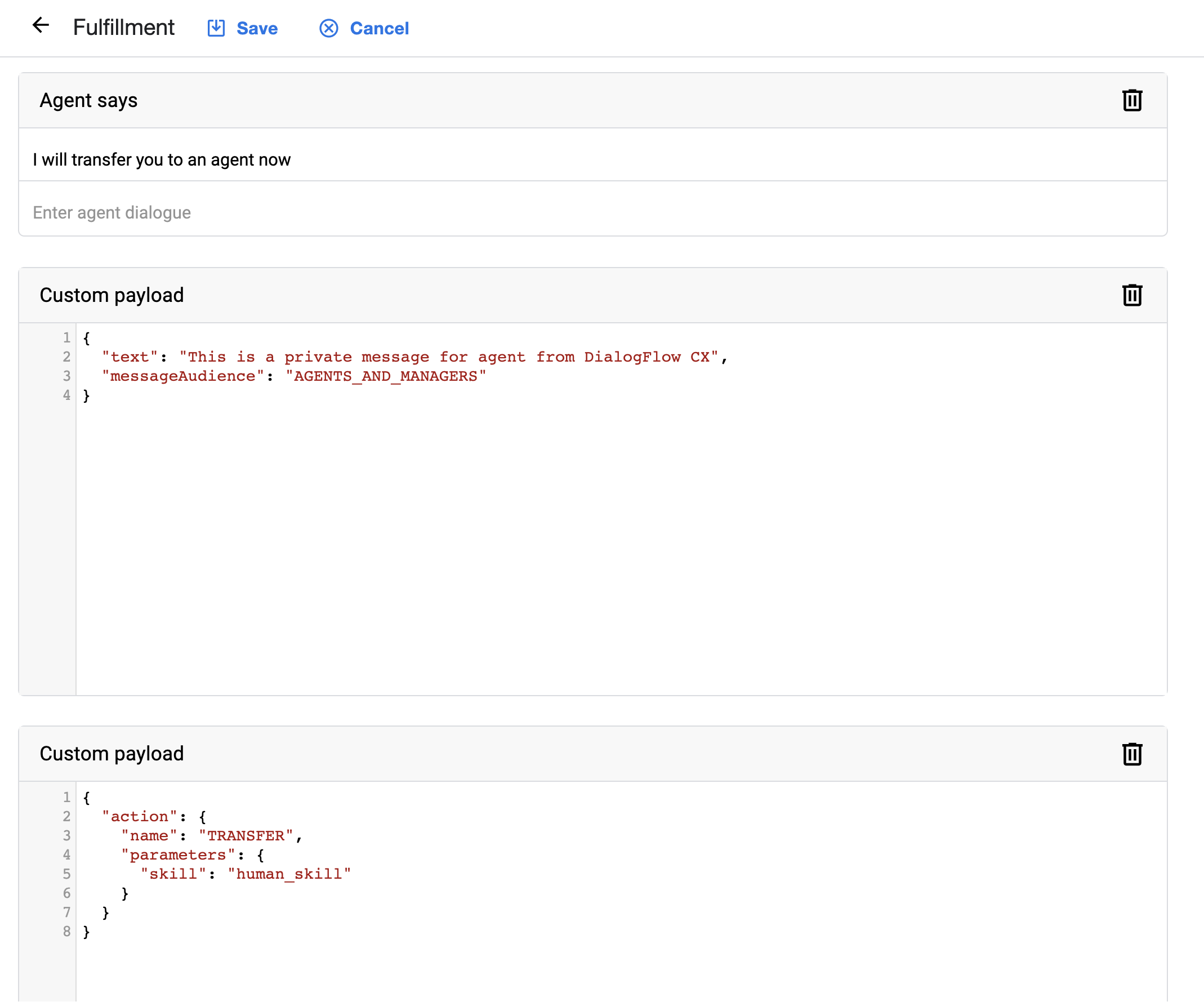 Figure 3.6 An example of transfer action with a simple text message and private text message in the Dialogflow console's intent editor

It is possible to send only a private text message response. The example payload of such response is below:

The method for triggering an invocation is similar to the transfer action in that the Custom Payload feature must be use to set the action and the parameters.

It is also required to provide the lambdaUuid of the function that should be invoked in parameters. To retrieve the Lambda UUID of your LivePerson Function follow this guide

In addition, it is possible to send your own payload to the function. Set your content inside the payload key.

The bot does not escalate on a failed invocation by default. To enable this, set the additional parameter failOnError to true 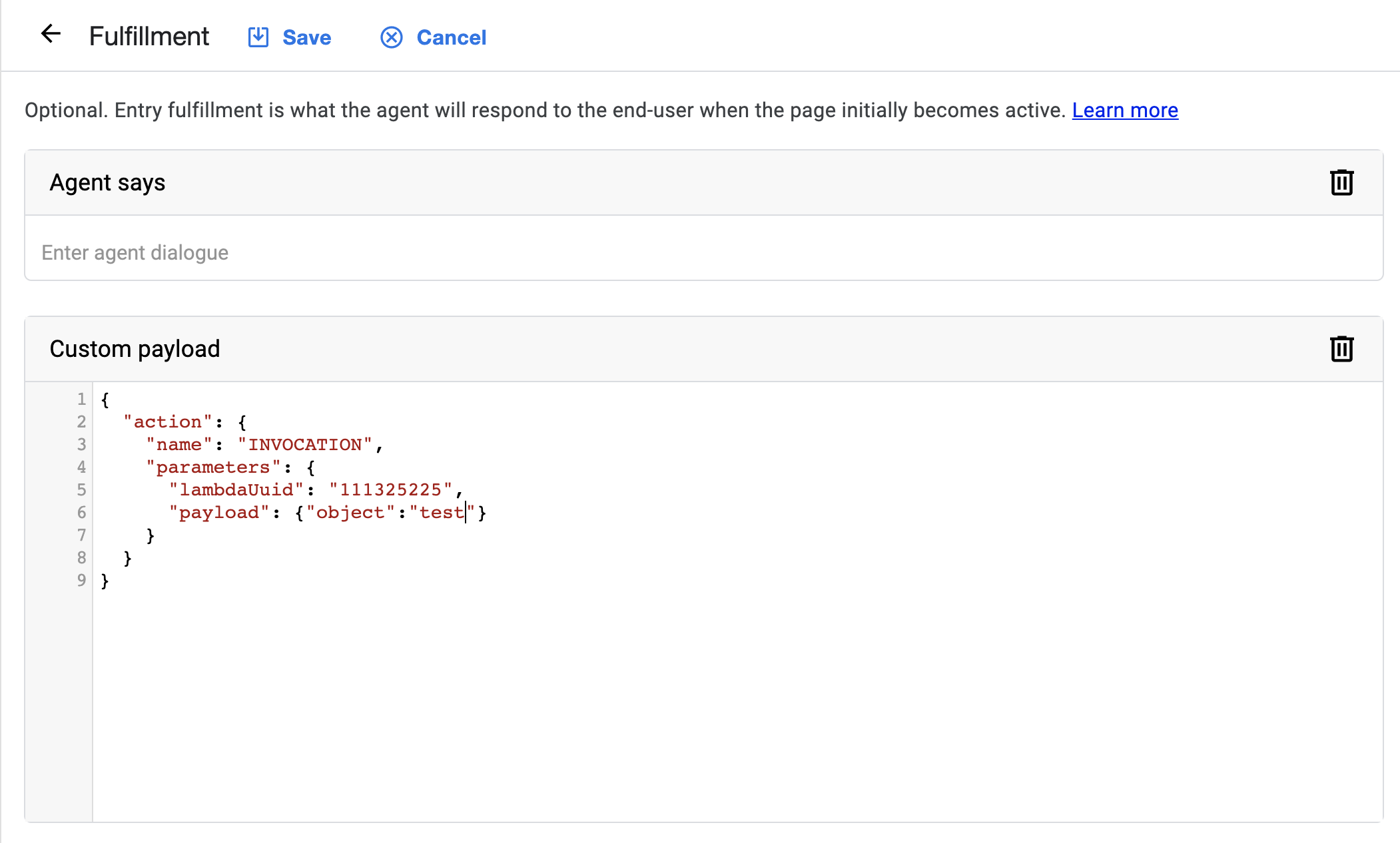 Third-Party bots allows the collection of engagement attributes (more information can be found here) if Engagement Attributes option is checked in the Conversation Type step as shown in Figure 3.8.

Third-Party Bots allows LivePerson's Rich Messaging channel capabilities not only to be received as a response from the vendor but also, allow Rich Messages (Structured Content) to be sent back to the vendor based on specific user interactions/responses (For example user sharing their location on WhatsApp). Please note these capabilities are sometimes limited by the channels in which the conversation is happening. For the list of Rich Messaging capabilities for each channel, browse or search the table on the Knowledge Center.

An example use case of the Rich Content Event(RichContentEvent) response sent by Third-Party Bots is described below. The example will show how to set up and access the RichContentEvent response with Google Dialogflow CX after a user shares the location.

We needs to create a intent which should have training phase com.liveperson.bot-connectors.consumer.send-rich-content as shown in the Figure 3.9 below. 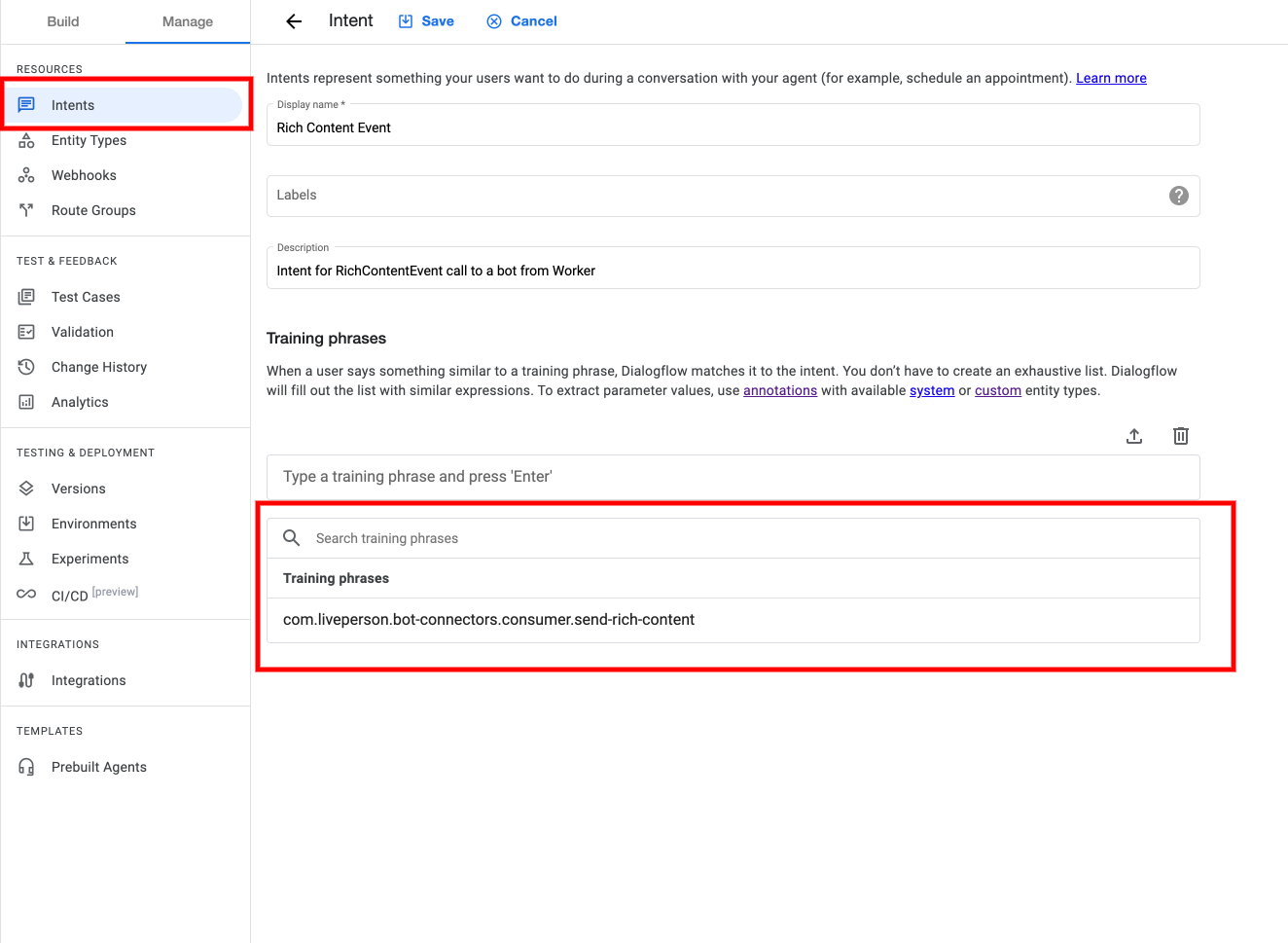 Example RichContentEvent body of a map rich content that will be sent by Third-Party Bots on user sharing location in WhatsApp is as below:

After the cloud function has been deployed, it can be added to the fulfillment of the page or your route by enabling WebHook. An example of enabling such a WebHook via Google Cloud function can be found in Figure 3.10 Highlighted area. If your function is deployed and active, it should populate in the list. Moreover, The Dialogflow CX console allows us to attach Third-Party WebHook calls as well.

Please note, you need to ensure that, Third-Party Cloud WebHooks should be accessible and respond in the expected Dialogflow CX response formate as we have shown in the example of Google Cloud Function above. 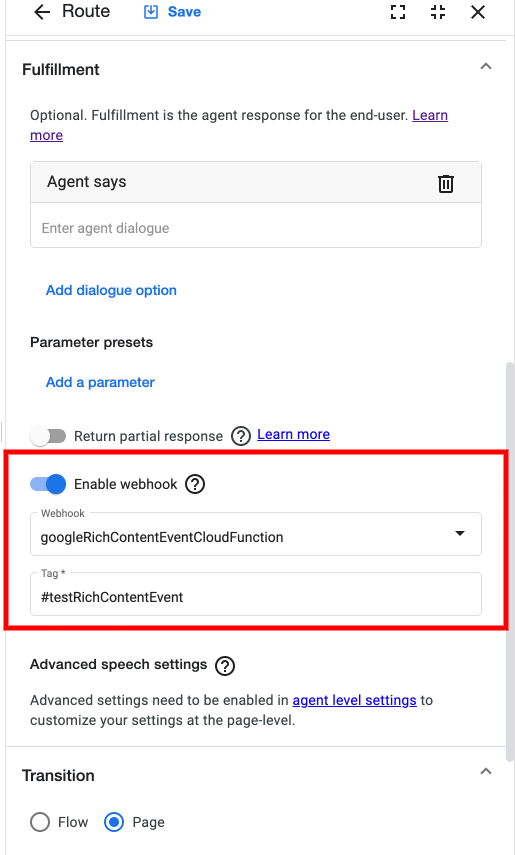 Once all of the above steps have been configured then the Dialogflow CX bot will be able to respond to the requests via the cloud function. A demo of our WhatsApp map example with Google Cloud Function (defined above) can be seen below:

We will describe an example of how to set up and access the WelcomeEvent response in Google Dialogflow CX below. We will use Google Dialogflow's capability of providing fulfillment via google cloud function as webhook.

Ensure you have an event handler in your flow builder that handles the custom WELCOME event, the highlighted area in figure 3.11 shows you how to add a new event handler in DialogFlow CX builder. 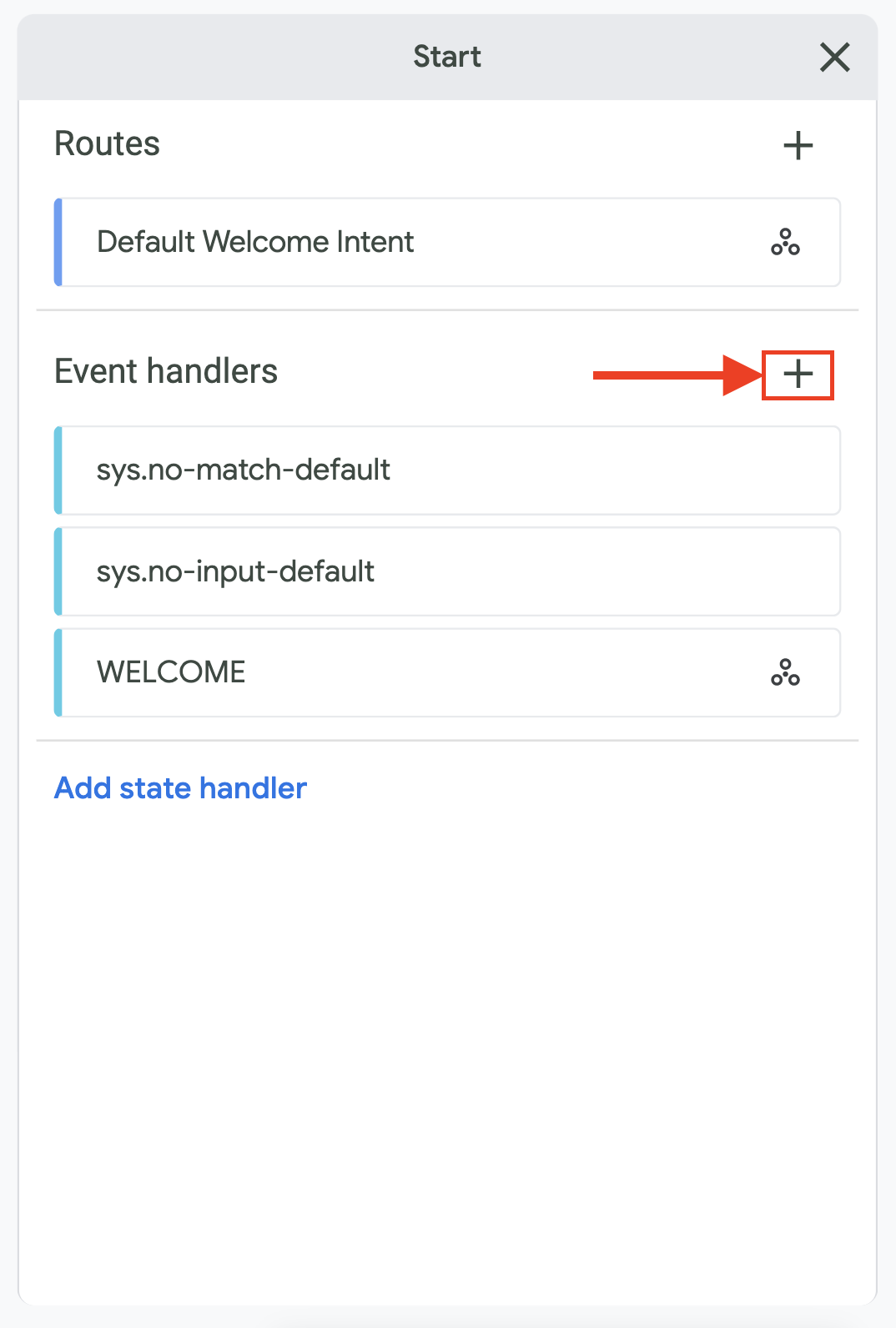 Figure 3.11 Creation of the welcome event

The minimal code example below shows how to check if lastConsumerMessage property is present in the request context, then sends back a text response containing the last consumer message. Please note, that response sent by The Google Cloud function should follow the Dialogflow CX response schemas

After the function has been deployed this needs to be added to the fulfillment section of the Welcome event handler. This fulfillment can be found in the Google Dialogflow CX console as shown in the Figure 3.12 highlighted area. Webhook need to be enabled and filled with the relevant information of the cloud function. (e.g. Auth Data and the Trigger URL) 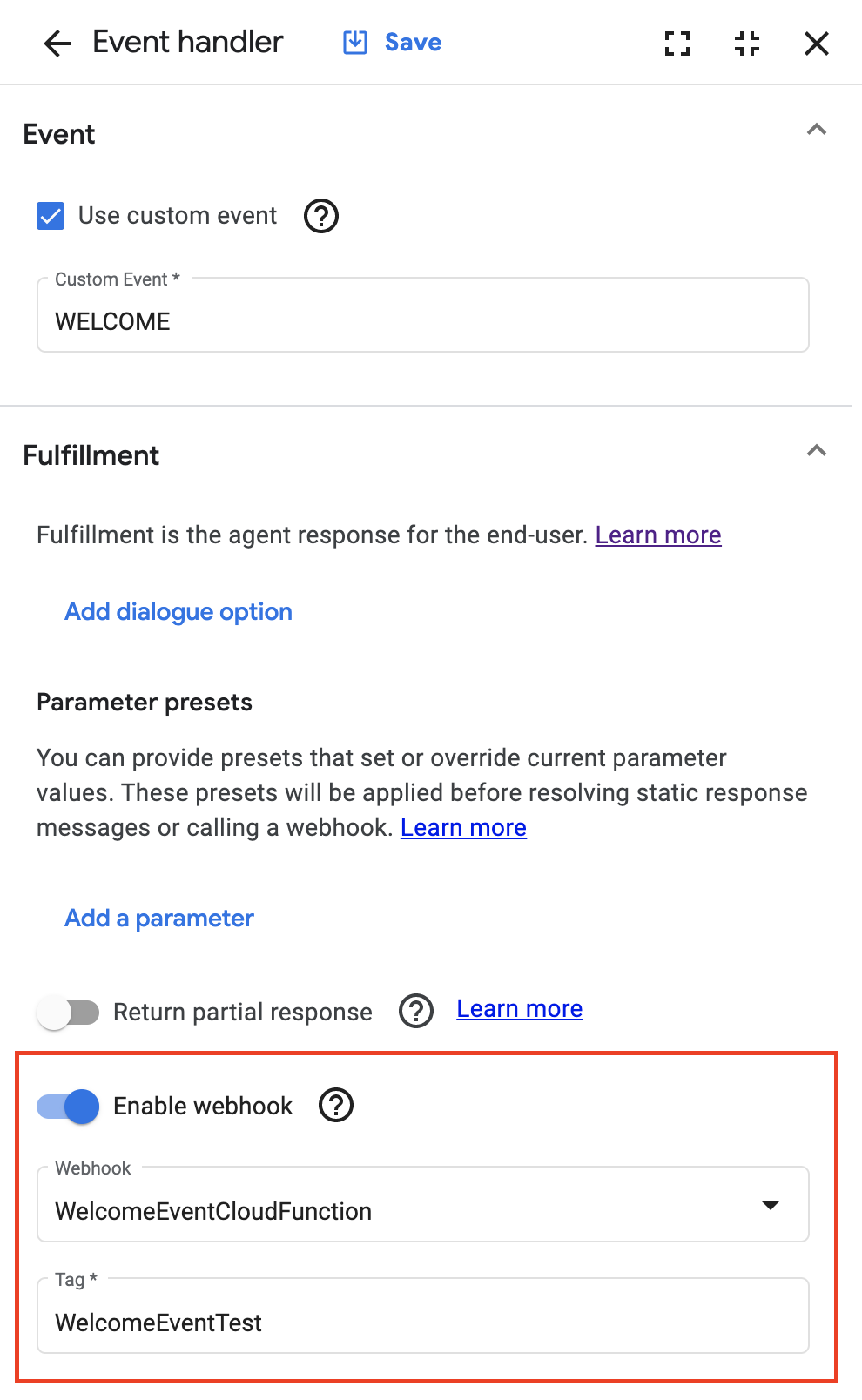 Figure 3.12 Webhook configuration that needs to be added for calling Cloud Function

Once Webhook configuration is added then the Google Dialogflow CX bot will be able to respond to the welcome event via the cloud function.