The Universal interaction, which is designed for advanced bot developers, is a flexible, channel-agnostic, code-based interaction that you can customize to render any conversational response from the bot. It opens up many opportunities to achieve the exact layout and styling that you require. For example, you might want to use a vertical card layout or perhaps a button question that uses buttons without button labels. In general, if you can code it in JSON according to the Rich Messaging format for Conversational Cloud, you can achieve it.

The Universal interaction isn’t intended to replace the existing interactions in Conversation Builder. For fast and easy bot development, LivePerson recommends that you always use them whenever they meet your requirements.

To use this interaction, first add it to the dialog. You'll find the Universal interaction in the Code section on the interaction palette.

Next, within the interaction, click + Enter JSON and preview.

This opens the editor, which works as follows: 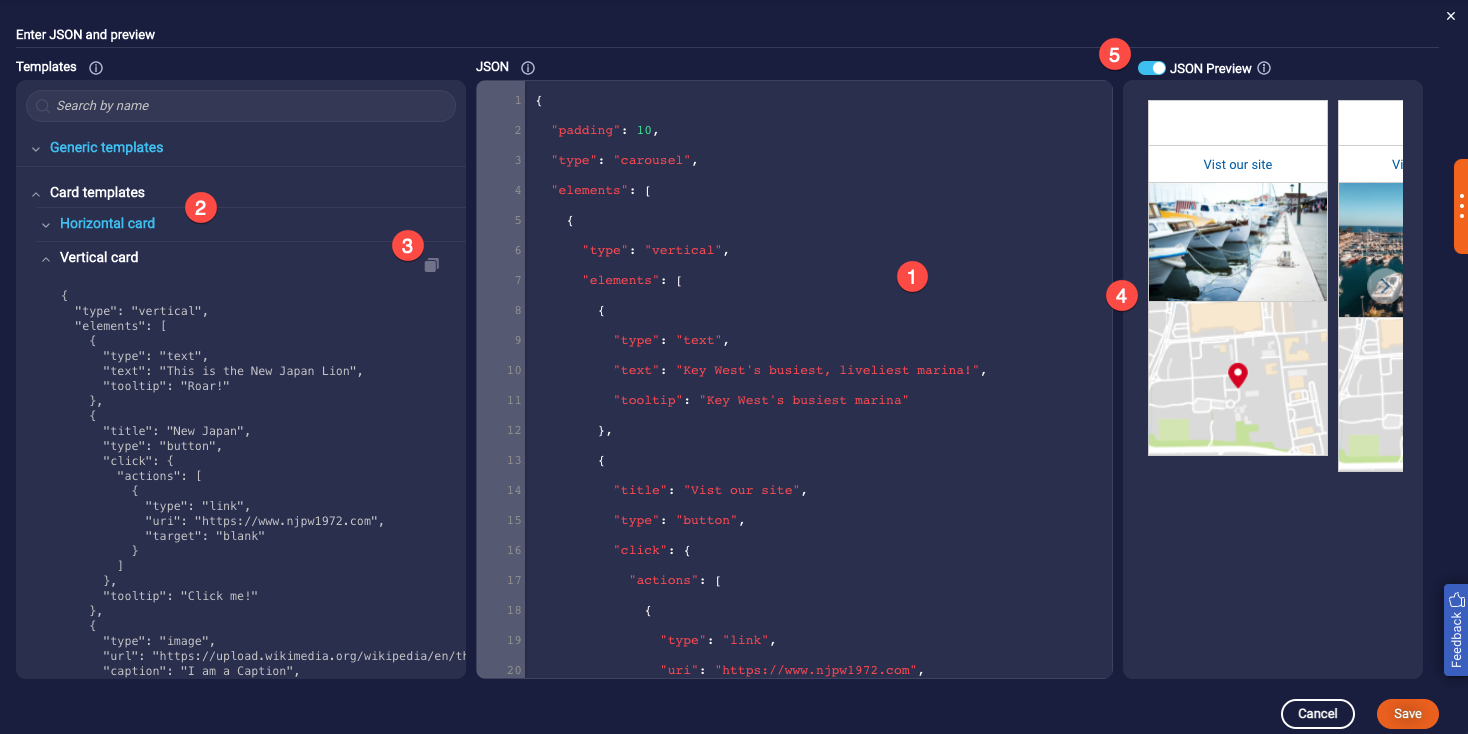 With the exception that you enter JSON code instead of interaction data, a Universal interaction works like any other interaction. This means you can:

There are templates available for various channels. Use these to get up and running quickly.

Within the code editor, a validation check is performed to ensure that the code is valid JSON.

As mentioned earlier, comments in the JSON aren't supported.

If your target channel is Apple Messages for Business, you might need to support authenticated messages that, by their nature, must include metadata.

In this example, metadata is added at the interaction level in order to send anauthentication request to the consumer.

Once the consumer authenticates by signing in with a username and password, you can retrieve the authentication token from the response metatadata using Conversation Builder’s getMetadata scripting function. The token can then be stored and used throughout the conversation.

In this example, metadata is set in a button’s configuration. During a conversation, when the consumer clicks the button, that metadata is sent back to the bot in the conversation’s metadata. You can retrieve the metadata using Conversation Builder’s getMetadata scripting function.

To fully test a Universal interaction, use a deployed bot.

The bot-level Preview tool can only render basic elements, not complex ones like cards or carousels. Additionally, the Conversation Tester doesn't support the Universal interaction.

When should I use the Universal interaction? And when shouldn't I?

As mentioned above, the Universal interaction isn’t intended to replace the existing interactions in Conversation Builder. For fast and easy bot development, LivePerson recommends that you always use them whenever they meet your requirements.

How does use of the Universal tile impact analytics?

The Universal interaction is reported in analytics like any other interaction.