Slot variables are still variables; they’re just a special type. If you want to automatically detect an entity within a Question interaction, you must use a slot variable that’s associated with that entity. Using a standard variable won’t accomplish this; only slot variables have this specialized behavior.

When combined with entities, slots bring dynamic, fluid behavior to storing consumer input. For example, if you add the Question interaction, "What type of shoes are you looking for?", Conversation Builder’s Assist tool will suggest appropriate entities and slots for that interaction. As long as the consumer stays within the bounds of entities that you have created, the slots will automatically adjust and update based upon consumer input throughout the conversation.

This section describes how to create a slot manually. However, if you use the Assist tool to assign an entity to a question, Assist automatically creates a slot to store the consumer's response. For info on this, see here.

To add a slot manually

{$botContext.slot.slotName} is how you can access values in slots and use them in other ways. For example, if you've stored a "shoes" entity in a shoe_type slot, you can have the bot respond with the consumer's stored answer with a text interaction like so:

If the bot asked the consumer, "What type of shoes are you looking for?" and the consumer answered "boots,” the slot for the entity “shoes” would be populated with their answer. The bot could then respond with "You answered: boots!" populating the code above with the consumer’s answer.

Example 1: Fill a slot with a value for a single entity 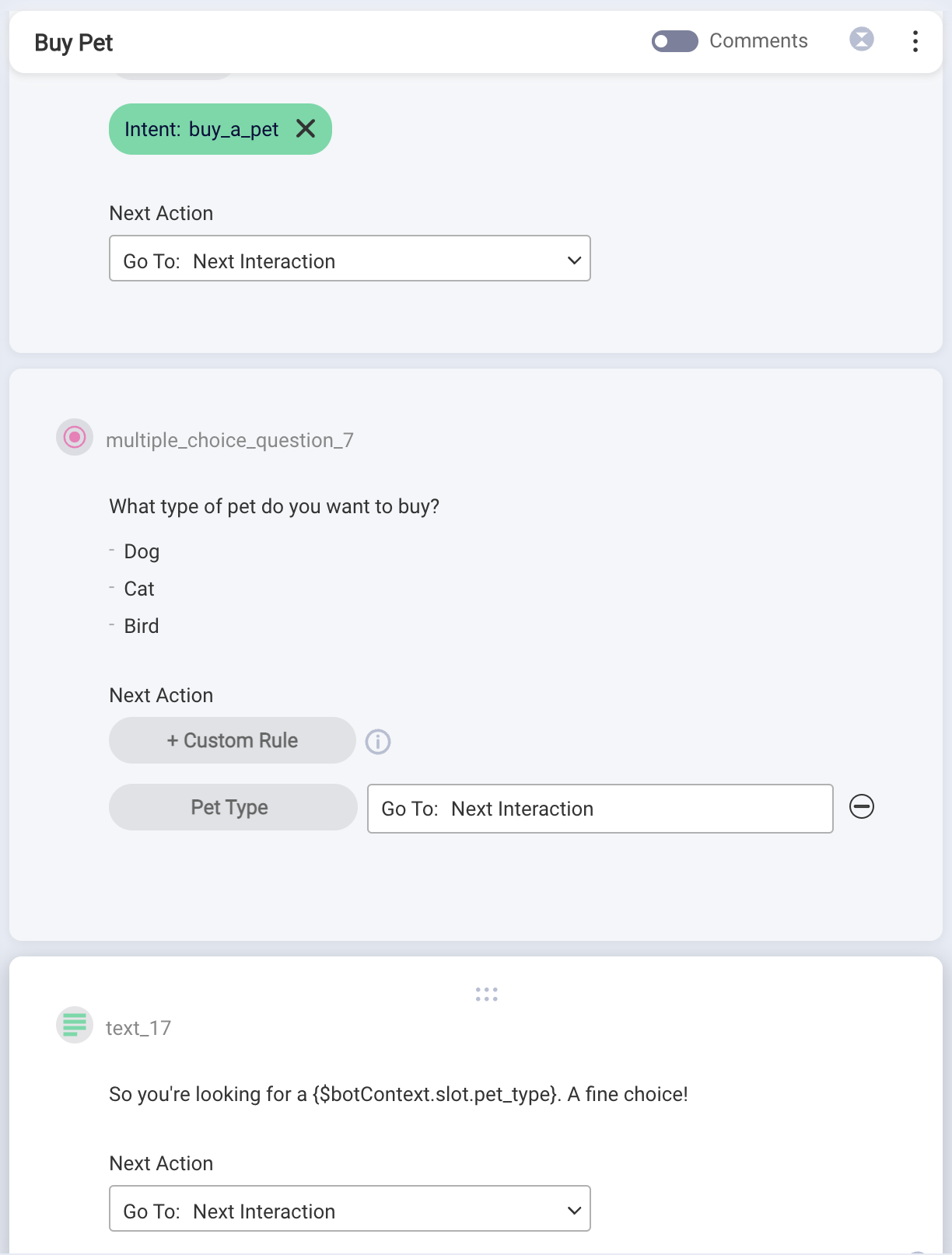 In the multiple choice question, the Pet Type rule's configuration looks like this: 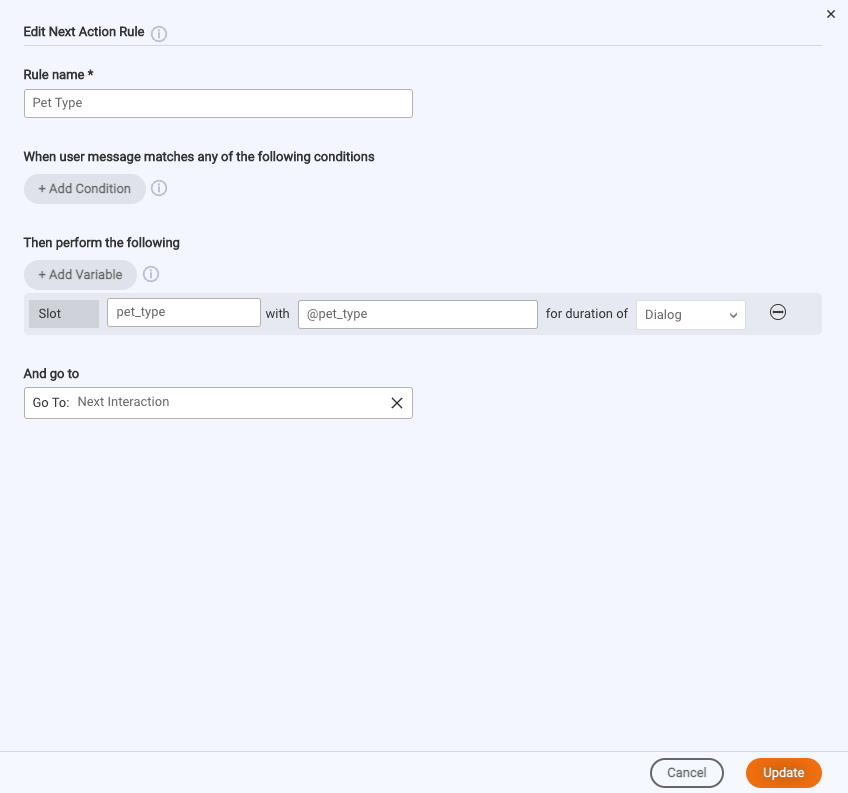 The result is that:

The key point is that if the multiple choice question detects that the entity already exists, it performs the slot-filling step, but it does not send its content to the consumer. The bot flow simply continues to the next action.

Example 2: Fill a slot with a value for one of several entities

Sometimes an intent can relate to multiple entities: For example, a consumer can make a reservation at a hotel or a restaurant.

To handle this, a slot-filling question can have more than one slot-filling rule. This means you can set up the question so that it captures whichever of multiple entities a consumer is interested in. Importantly, the rules can all fill the same slot, so you can easily use the slot later on. Here is an example that illustrates the concept: 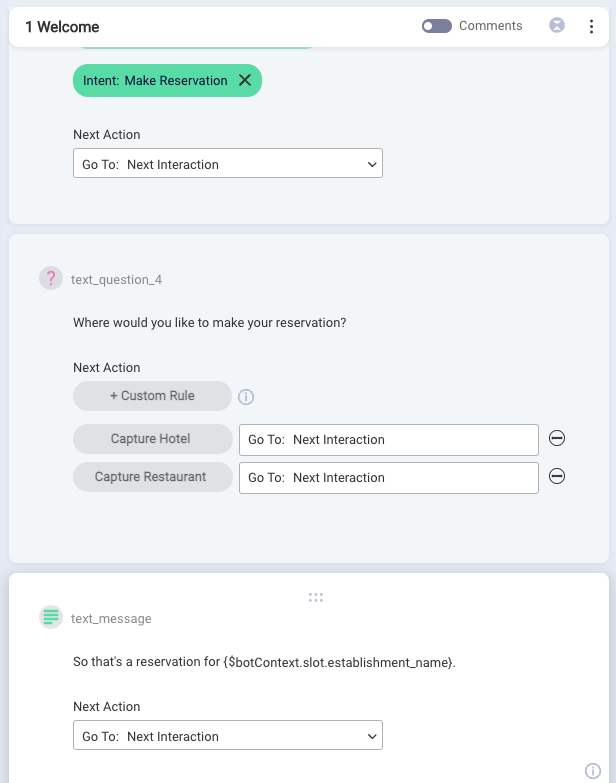 Note the two rules in the question:

There are two different entity types involved: hotel and restaurant. Each rule captures one of those. Here is Capture Hotel: 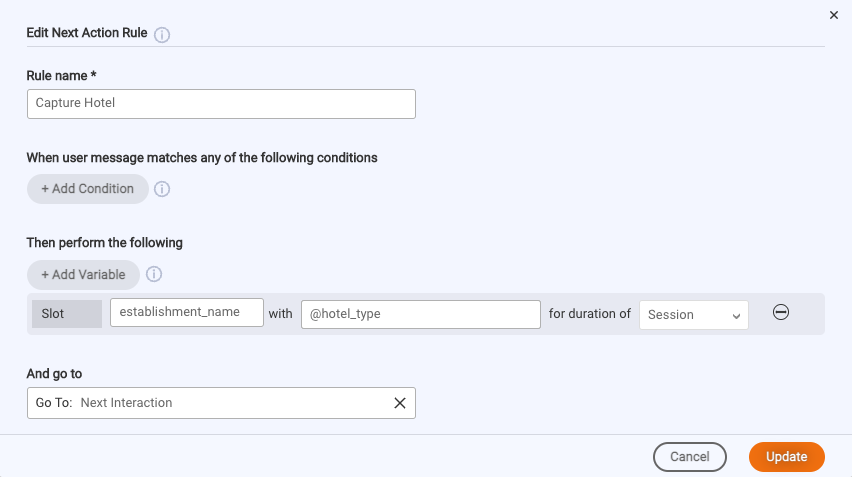 And here is Capture Restaurant: 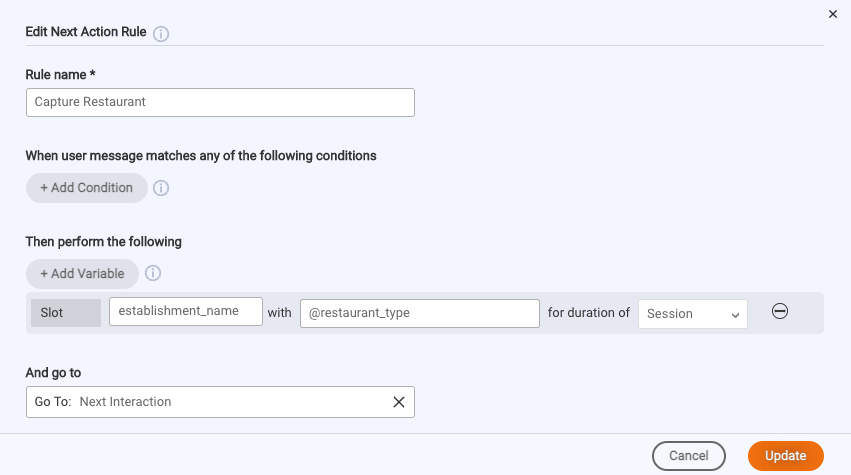 As we've discussed in Example 1 above, if either of the question's rules are met by the consumer's initial intent, the question fills the slot, and it does not send its content to the consumer.

In this case, both rules fill the slot establishment_name. So, regardless of whether the consumer starts off with, “I want to eat dinner at the Olive Garden” and Capture Restaurant is triggered, or “I want to stay at the Holiday Inn” and Capture Hotel is triggered, establishment_name will contain the restaurant or hotel name. So, it can be used in the subsequent text statement: “So that’s a reservation for Olive Garden” or “So that’s a reservation for Holiday Inn.”

Importantly, if the consumer were to start off more generally with, “I need a reservation,” then neither rule in the question would be triggered, so the question would send, “Where would you like to make your reservation?” The consumer's response would then be used to fill the establishment_name slot according to the rules. And again, the text statement sent in response would make use of the value.

Example 3: Fill multiple slots with the values for multiple entities

Slot-filling becomes especially useful when mining the entities that make up a consumer's intent to pre-populate your list of questions, and streamline the data collection process. Consider the following example: 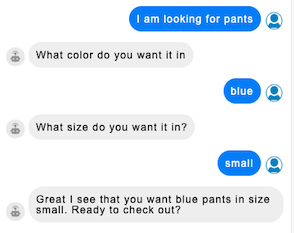 If a consumer expresses all the slots as part of their intent query, it will skip to our confirmation step.