When you begin, first take a look at how the existing model is performing. There are a few key things to note:

First, to easily gauge the coverage of the current model, visit the Intent Manager dashboard and check the “Top Intents” and “Intent Summary” pie charts: 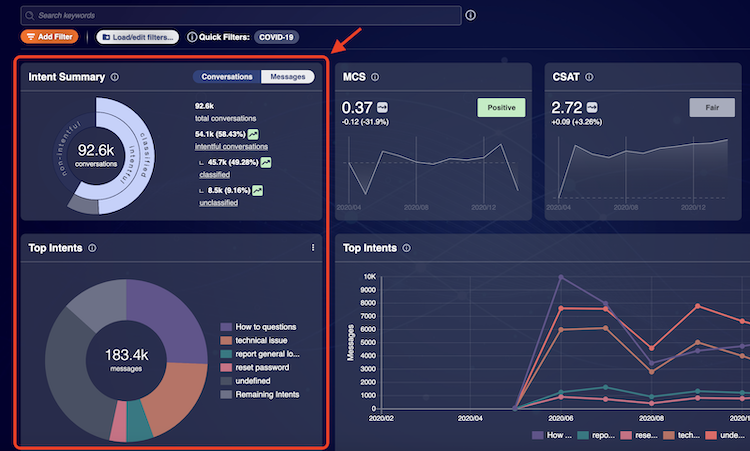 In the Intent Summary pie chart, check both the classified vs. unclassified space at both the “Conversations” and “Messages” levels using the toggle buttons. In the Top Intents chart look for how much of the pie chart “Undefined” occupies. If any of these metrics are very low, i.e., one-quarter or less of the pie charts, it is unlikely there will be many intents to discover. Take this into consideration as you proceed. Don’t see undefined in the Top Intents chart? Enable it by clicking the gear option and selecting Display “undefined” intents.

Intent discovery is the task of finding new intents to add to your current taxonomy. This is useful to expand your model’s coverage. Make sure to consider any existing intents (i.e., a starter pack) as you begin this process since you do not want to create an intent that will overlap with one of the existing intents in name or function.

Sometimes it’s better to use the keyword filter instead of creating an intent, depending on your goal. For instance, if you want to see which intents are being impacted by a devastating event like a wildfire, you could use a list of keywords such as “fire,” “smoke,” “air quality,” “evacuation,” etc., and from there, you can check the graphs to see how often the keywords are occurring per intent as well as other useful metrics like the total number of utterances that contain one of the keywords.

Below is a visual guide for anyone starting the intent discovery process:

For an alternative method of finding new intents, try looking through the data manually, following this process:

Now that we have discovered and named a few intents, let’s use our full list of intents to classify some consumer messages. These messages will be used as training data to create a model for the intents you’ve discovered. Determine a few rules for which messages should be classified by each intent and write them down. These rules are what we call intent “definitions” and will help you stay consistent as you classify messages. Make sure that the definitions of each intent do not overlap. Below are some examples of intents and their definitions:

There are a few methods you can use to find more messages:

First, you can read the unfiltered messages directly from the “Messages” view on the Intent Discovery tab, just make sure not to have a cluster or subcluster selected:

Another method is to use a keyword search to filter your results, as seen below:

Last, you can use the “Discover Similar Messages” feature to find messages similar to a message you select. To start, highlight a message with your mouse and click “discover similar messages,” as seen below: 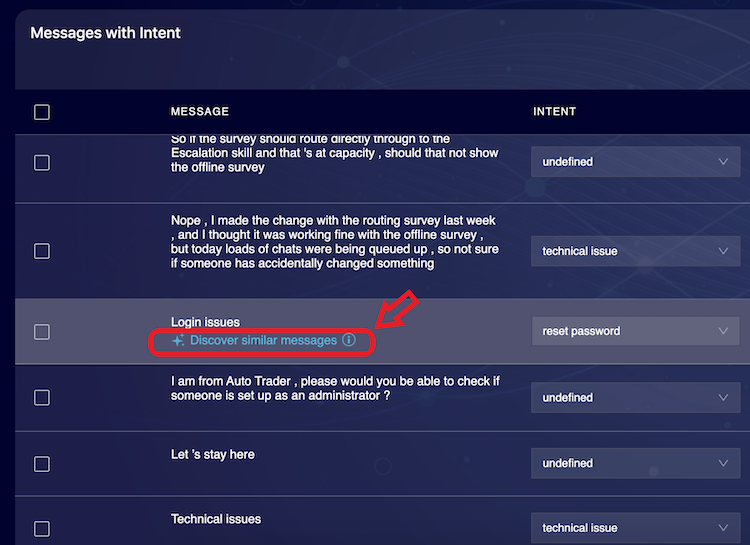 After clicking “discover similar messages”, Intent Manager will load a new set of messages into the “Messages with Intent” window, all of which are similar to the message that you picked at the beginning: 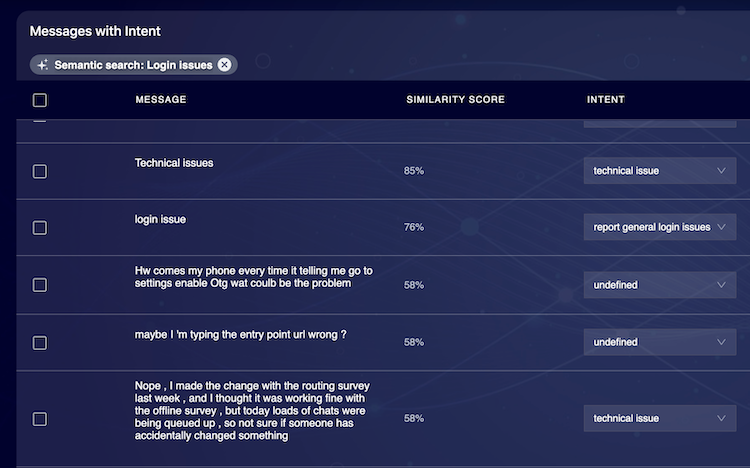 Alternatively, you can use the clusters and subclusters in Intent Discovery to find additional training data as well. To do this, go to Intent Discovery’s cluster view and click a subcluster that you want to add to an existing intent. Once you’ve done this, click View Details and the utterances from that cluster will be brought over to the “Messages” window.

Regardless of which option you choose to find more messages, once you’ve found them, use the dropdowns on the right to classify them, or you can select multiple messages with the checkboxes on the left and reclassify them as a group.

You can also export the utterances using the “Export table to CSV” as a spreadsheet to Excel or Google Sheets. Once the data has been exported and downloaded onto your local device, you can upload the file into Google Sheets or Excel and begin classifying messages.

Now that you have discovered some intents and found the training data for those intents, you’re ready to train your model. You should train your model at regular intervals as you add new intents and training data. Typically, we advise training a new model at the end of every session of work. This allows you to see the results of your changes the next time you revisit the model.

Sometimes an intent is too broad and all encompassing. This can cause an intent to be less actionable and have poor accuracy. A simple way to fix this issue is to split the broad intent into smaller intents. An example of this is splitting the intent "Ask about credit limit" from the Financial Services industry into three smaller intents: