There are four, general categories of interactions:

Tips on order of operations

One of the goals and challenges in developing interactions is creating a unified implementation and consumer experience across channels. When working with structured content in particular, LivePerson recommends that you find the "common denominator" across mobile messaging, web messaging, and Facebook Messenger with respect to a given element's attributes. For example, in a structured question, Conversational Cloud allows up to 128 characters for the button label, but Facebook does not allow more than 20 characters. Depending on your implementation, constraints like this might play a role.

For details on constraints like this, refer to Rich Messaging best practices as well as the Messaging channels section in the LivePerson Knowledge Center.

Your bot implementation should meet Conversational Cloud requirements and those of the specific channels in use.

For info on whitelisting rich media, see this section.

If you have long web links, you might want to enable the shortening of URLs. You can enable this at the bot level using the Shorten URLs setting in the bot's Bot Settings.

As an example, if you enable URL shortening, a URL like this…

…is shortened to this:

As long as the image is whitelisted (discussed above), it will be sent to the consumer. Provide high-resolution images in the appropriate format: JPEG for photos, PNG for bitmap/raster artwork. Make sure the images are interesting and aesthetically pleasing, and verify their quality before use. Keep the images as small in size as possible, so they load quickly.

When selecting an interaction to add, make sure it's supported by the channel you will be using.

To add a new interaction to the end of the dialog

If you name your interactions (1), it's easier to see and understand a dialog's flow (2). 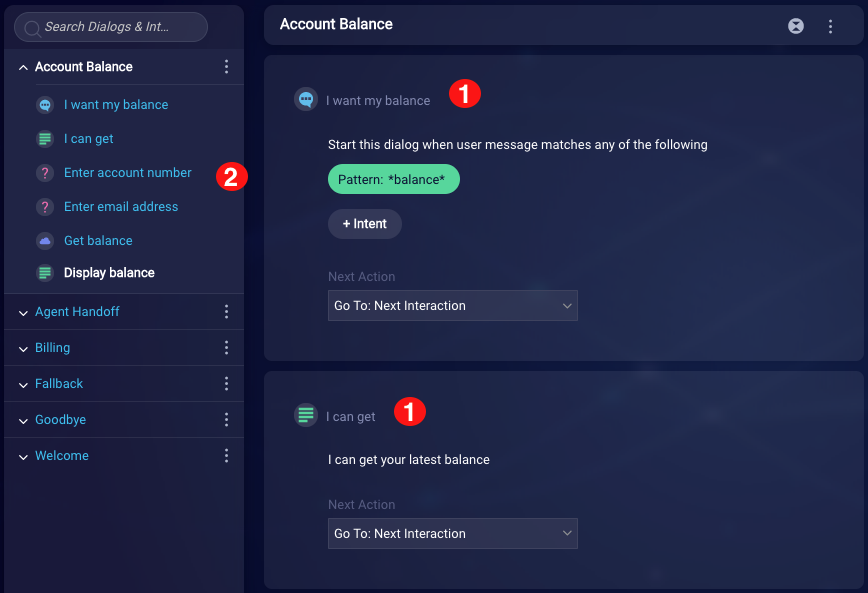 The name must be unique with respect to all interactions in the bot.

Patterns are combinations of keywords, wildcards and alternates that are compared to user input. A user input is considered a match to a pattern if it fits the pattern exactly. Therefore, a pattern of "hello" will only match with the user input "hello".

Patterns can also include wildcards for looser matches. For example, *home* will match "homes", "home run", and "home is where the heart is".

The basic operators available for use with pattern matching are:

You can use wildcards and alternates together like this:

When you're specifying a pattern in a dialog starter or in a condition in a custom rule, you'll see a library that's available.

If you need more advanced operators, you can use regular expressions with pattern matching. 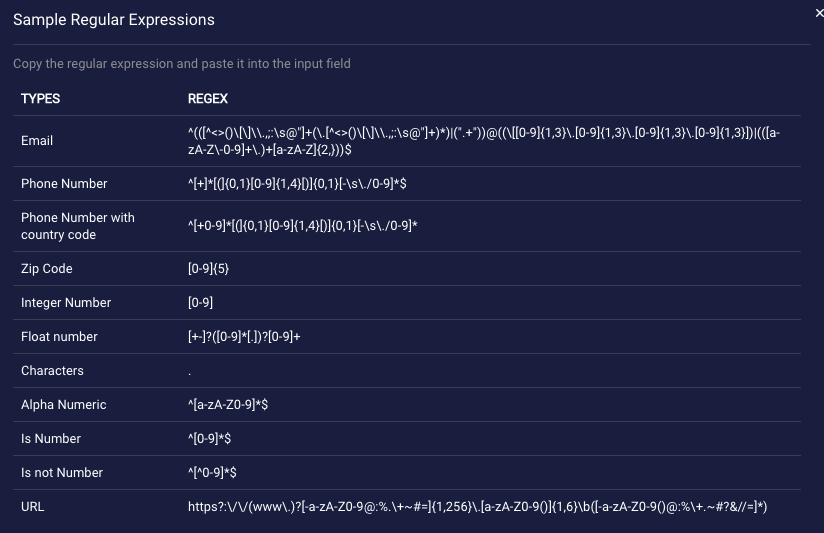 Use variables and slots in interactions

For info on this, see this section.

You can use the following subset of HTML tags:

The HTML tags render in Conversation Builder's Preview tool and in the Web messaging/chat window based on the capability of the respective tool, window, and channel in use. Be sure to test in the target channel to verify support.

This does not render when using the Preview tool inside Conversation Builder. You will not see line breaks in the preview tool.

One single text interaction has a limit of 320 characters on the word boundary before it gets split into 2 parts. However, you can override this behavior with the setAllowMaxTextResponse scripting function.

Break point within a large block of text

Add the following special tag inline inside your text interaction to force a break into 2 separate blocks of text: 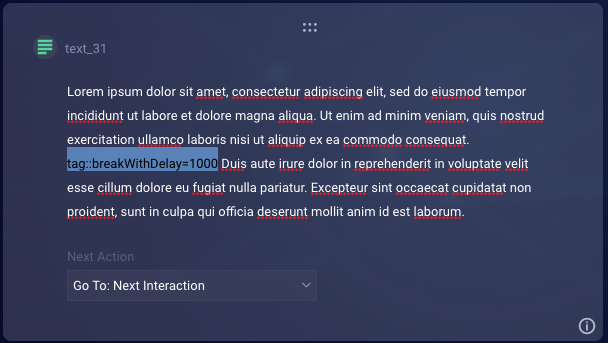 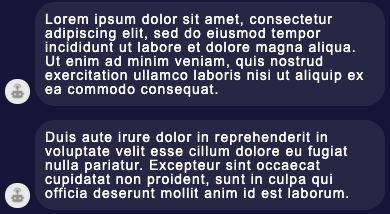 You can add comments to an interaction to annotate your solution, i.e., to describe what the interaction is for, what it does, and what it needs.

Use comments to quickly explain things. They are particularly helpful when you work in a collaborative context that includes multiple bot builders, and when the person maintaining the bot isn’t the one who built it originally.

Comments are displayed at the bottom of the interaction like so: 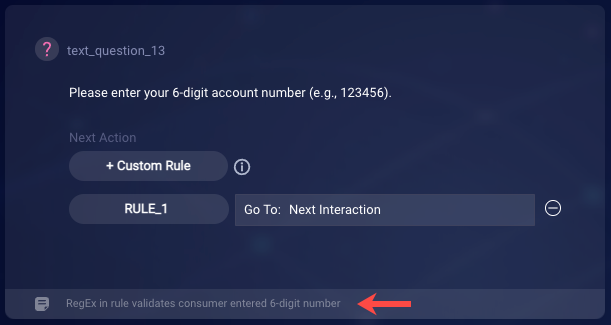 To show or hide comments

When you select an interaction, if it has a comment, the comment is always shown. This is done as a convenience because you're actively working in the interaction.

However, you can toggle on and off the display of comments in the other interactions in the dialog. To do this, use the Comments slider at the top of the dialog. 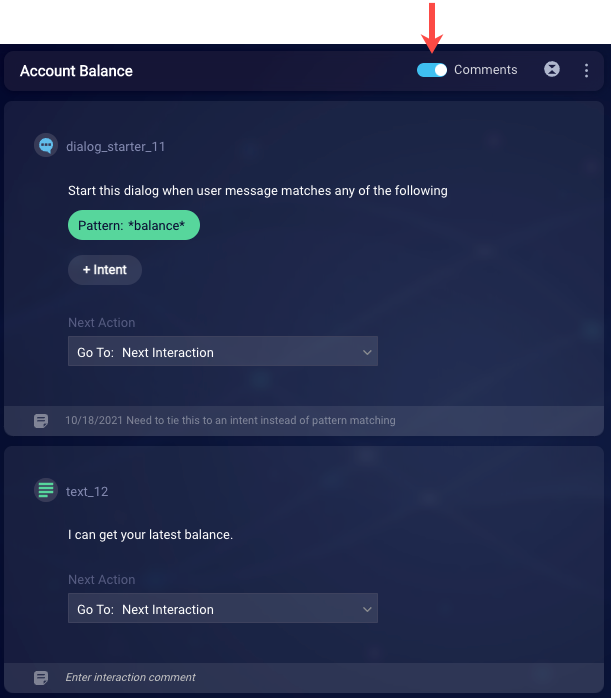 When comments are hidden throughout the dialog, you’ll see a small icon in the lower-left corner of an interaction to let you know that a comment exists for the interaction. 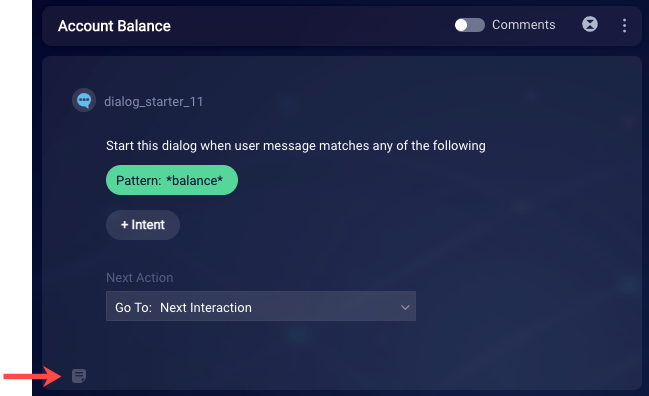 Some but not all changes are automatically saved after you make them. As a general rule, always do a manual save after making changes.

To save changes to an interaction

You can move an interaction within the same dialog or across dialogs.

To move an interaction

To duplicate an interaction

A disabled interaction is ignored in a dialog flow. Consider disabling an interaction as an alternative to deleting it (deletion is non-recoverable). Disabling can be particularly useful during testing, for example, when testing two different variants of an interaction.

To disable an interaction

Deleting an interaction is a non-recoverable action, so consider disabling the interaction as an alternative.

After you delete an interaction, verify that the interaction flow isn't broken as a result. You might need to modify the Next Action field in the remaining interactions so that the conversation flow works as expected.

To delete an interaction