On this page, we will introduce the different concepts that are relevant for the LivePerson Functions platform. As a platform user, it is crucial that you have a basic understanding of the platform's underpinnings. The following chapters will help you build it.

The concurrency describes how multiple requests happening at the same time are handled and processed. This is something important to Function-as-a-Service (FaaS) offerings. The prominent vendors in this sector usually handle one request in one instance so that each request is dealt with by its own instance running the logic. LivePerson Functions operates a bit differently in this regard by batching multiple requests together and handling them within one instance, which means that not every individual request is dealt with by its own instance. This implies that blocking code may negatively impact other requests that are handled at the time. The platform will spawn multiple instances based on the overall traffic that is being received. If there is more than one instance due to scaling, traffic is distributed between them.

You may also consider that (local) changes to a function instance are not distributed to other instances. For example, changing an environment variable at runtime will be not replicated to other running instances.

A cold start refers to the time cost when a (new) function instance is spawned to handle an incoming request. Where the cold start penalty is the time window in which the function instance is spawned and waited for to become ready to process. Given that we batch multiple calls as described in the above chapter, we usually only see a cold start occurring if there was not a call for a long time. If you run into issues where a cold start happens, you always have the option to keep the instance warm by having a scheduled invocation running, ensuring it never turns cold.

If you plan on implementing a scheduled invocation to keep it warm, make sure that the "warming" logic is separated from your regular flow. As otherwise, this might cause unexpected issues or behaviours.

This chapter is about the invocation timeline and highlights which part of it counts toward our execution time limit of 30 sec. As highlighted by the graphic below, the invocation process starts with the event raising by a Trigger. Our services will receive the event that will begin invoking every function listening to the specific event. For simplicity, we only considered one function. Our service will invoke the listening functions, which then starts processing based on the code. With the receiving of the event by the function instance, the 30s time limit starts ticking down. Once the processing is finished, our service takes over the response and relays it to the triggering service. Which then will react to the response.

Triggers will usually invoke functions, which happen in two ways. Either by calling specific functions or raising an event. The main difference is that the trigger does not need to know any details of the function listening to the event for event-based invocation. Those triggers are usually Event Sources. Therefore the words trigger and Event Sources will be used interchangeably. Unlike events for an external/direct invocation, the caller needs to know about the function and call it specifically. These are usually scheduled invocations, external invocations, and also some event sources.

The following graph also shows the general invocation flow for both invocation styles. 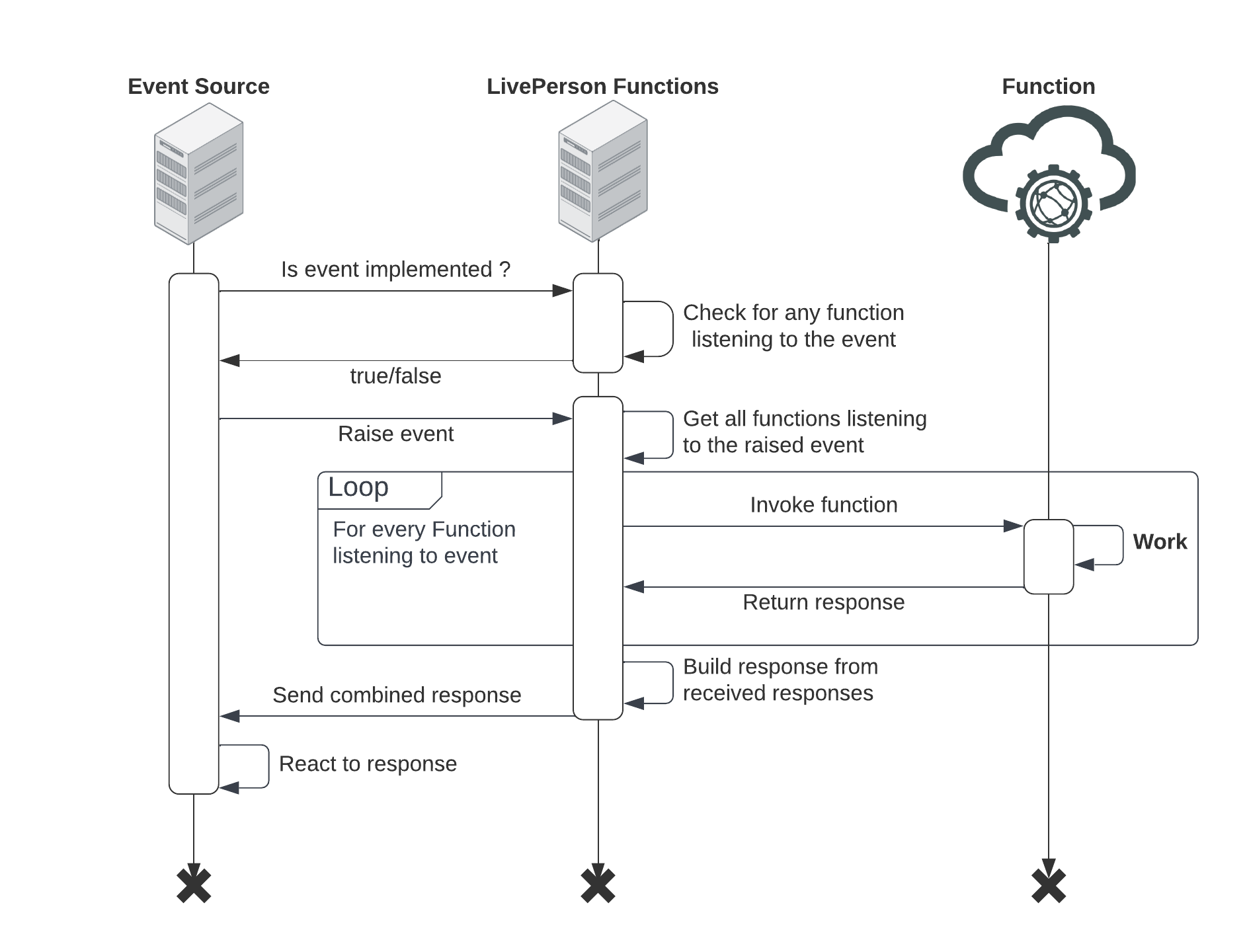 Before raising an event, the event source will check if there is a function listening for the specified event. Only productive functions are considered. If a function listens to the event, the trigger will raise an event. Our platform will search all functions listening to the specified event and start calling them. Once all responses are received, they will be combined and returned to the event source.

Please be aware that failing functions will abort the invocation chain for that event. 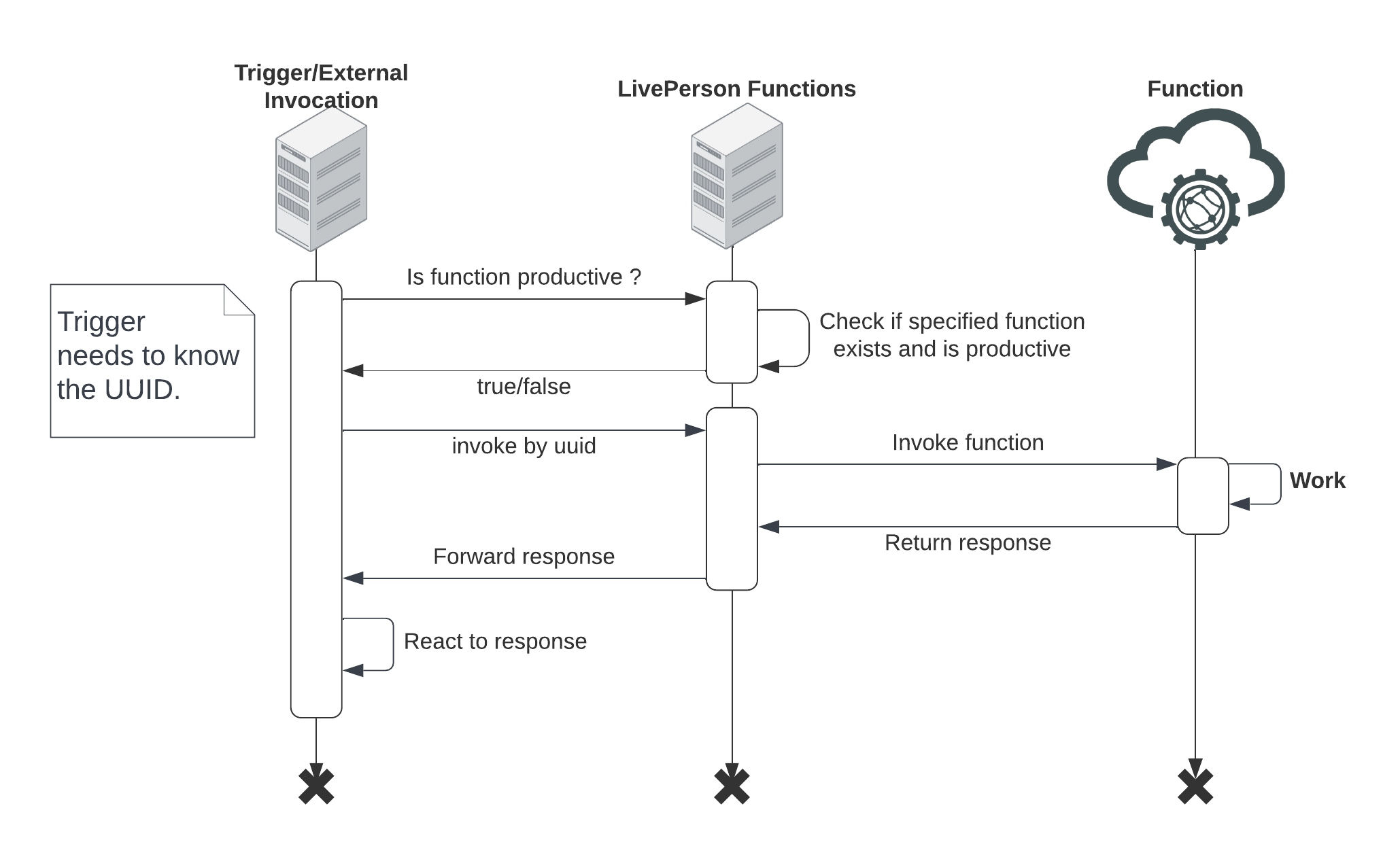 Before calling the external trigger, may check if the function is productive. However, they can also decide to invoke the function and directly handle the potential not-found error. The caller needs to know the function's UUID for a direct call. The execution response will be sent from the FaaS platform to the calling trigger.