You specify an interaction's Next Action directly on the interaction tile: 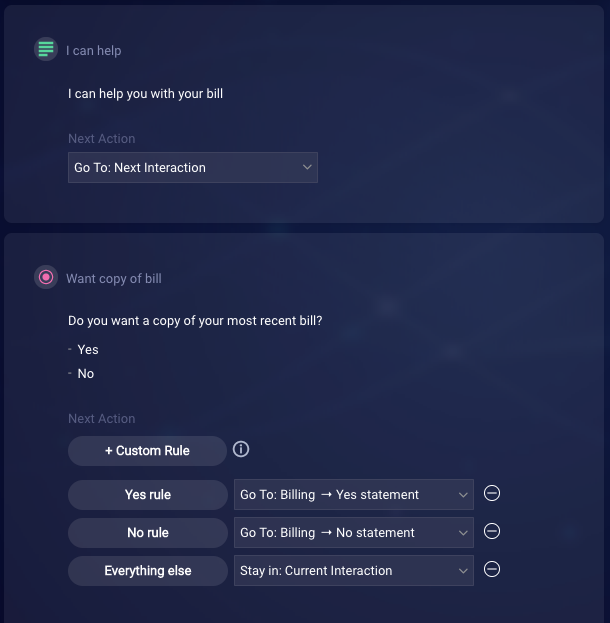 When specifying the next action, you can select from the following options:

As shown in the image above, in question and integration interactions, you can create custom rules that determine the next action that occurs. This is discussed next.

A custom rule contains a set of instructions for how to respond to the user input or to the result of an integration call.

As an example, the following rule says that if the user responds to a Yes/No question with the pattern "yes," "yah," or "yup," the dialog flow should continue to the Yes statement. 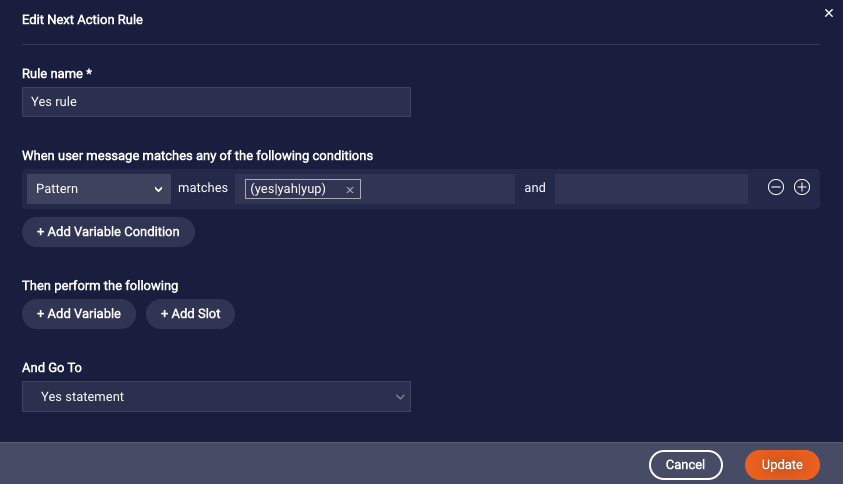 In question and integration interactions, you can create one or multiple custom rules depending on how many responses you need to support.

Use the guided Add/Edit Next Action Rule window to: 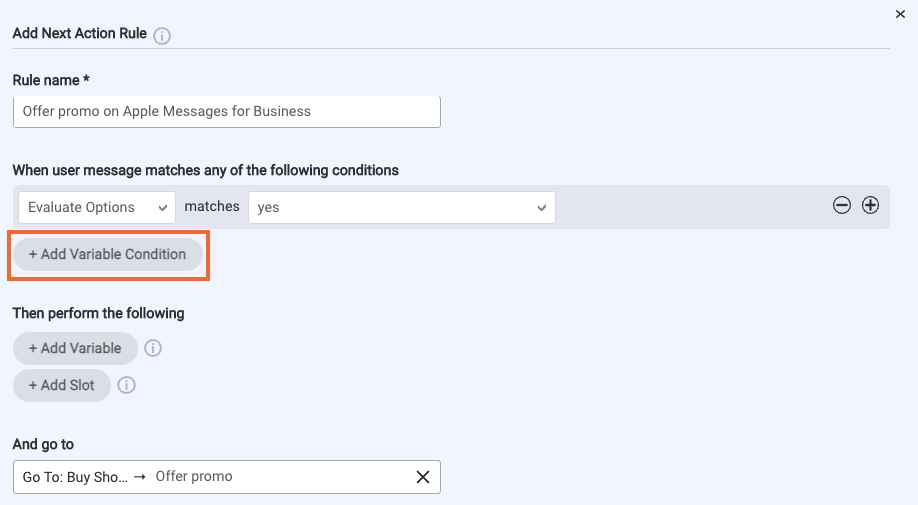 To specify a botContext variable in a variable condition, enter only the variable name.

In our example below, the consumer must answer "yes" to our question, and the channel variable must be "AMB" for Apple Messages for Business. If both are true, then the consumer is offered a promotion. 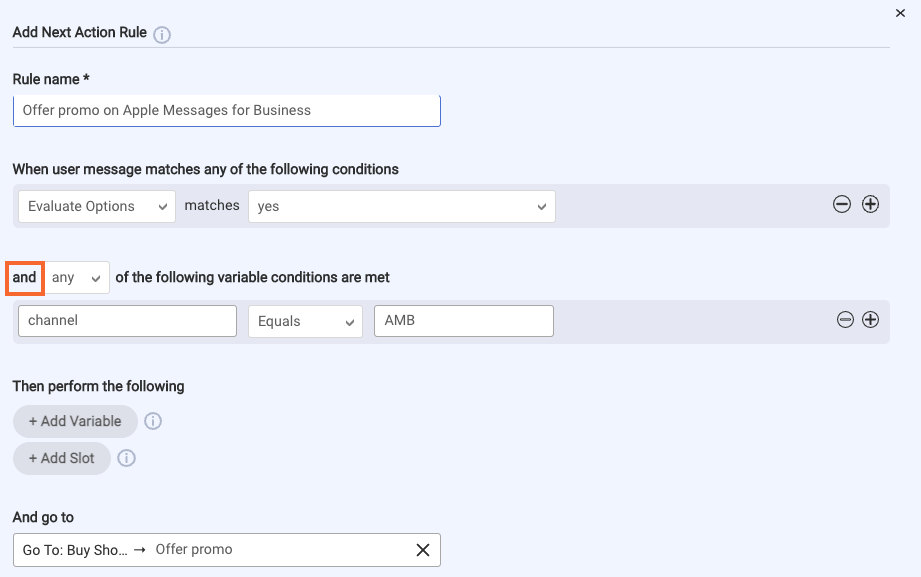 We could further expand the example to include additional custom rules with variable conditions that checked for other channels, e.g., SMS and so on, and configure next actions for those as well.

If an interaction has multiple custom rules, they are evaluated in the following order:

Within the above confines, the rules are then evaluated in the order they are listed.

To reorder rules, move the cursor over the area to the left of the rule, and click the Up or Down arrow that appears.

For information on the match types mentioned above, see Conditions, which is discussed next.

Conditions are "if…, then…" statements that, when combined with pattern matching, intents and entities, deliver a powerful flow control engine for the bot.

Consider the following question that asks the user for their 6-digit account number.

The question contains a single rule, which is this: 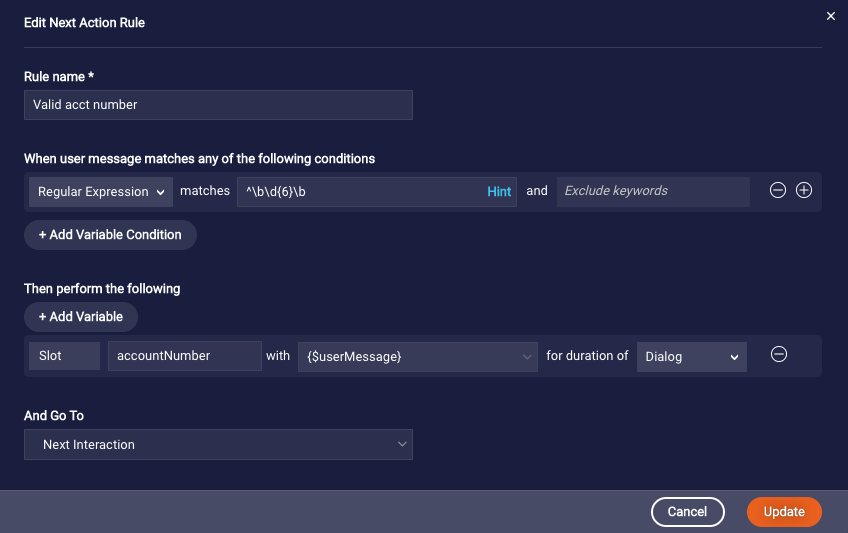 Like in the example above, when you define a condition (in a rule) in a question interaction, you specify how you want to match the user's input. You can select from the following match types:

You can define a condition (in a rule) in an integration interaction to direct the dialog flow based on the result of the API integration call. This is a best practice that's recommended by LivePerson. 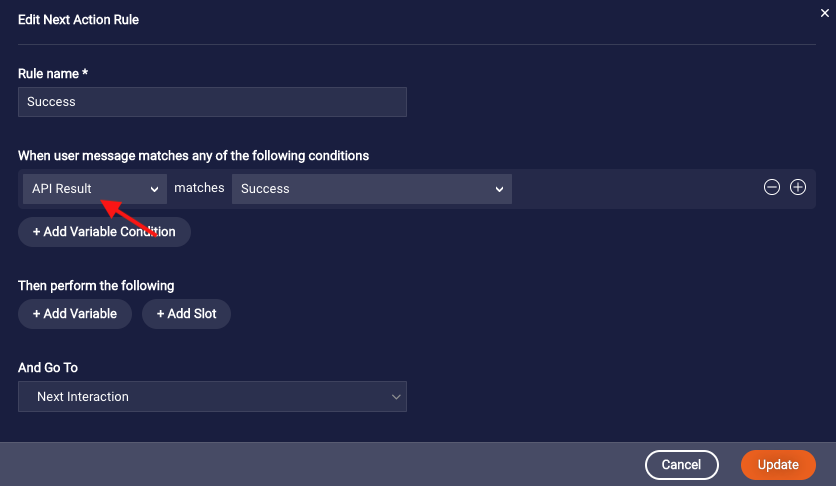